We compare Alturas G4 against other D2-segment SUVs on the basis of prices, engine specs and dimensions to analyse how it holds up against the competition. 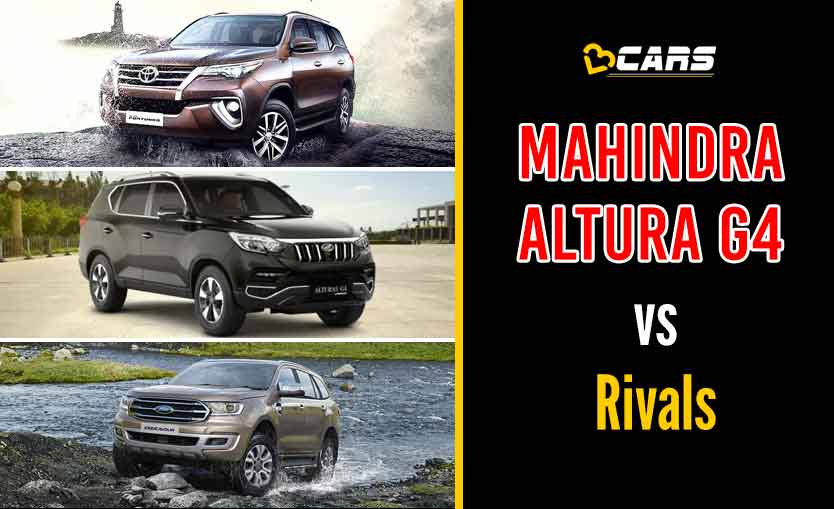 Only the Toyota Fortuner is available with a manual transmission and it costs Rs. 30.67 lakh for 2WD and Rs. 32.64 lakh for 4WD.

Mahindra Alturas G4 diesel automatic comes with 2 variants: 4x2 AT and 4x4 AT.

If you're looking for a car with lower fuel costs, then Toyota Fortuner will be better since it is the most fuel-efficient car in this segment.

Mahindra Alturas G4 is 4850mm long, 1960mm wide, 1845mm tall and has a wheelbase of 2865mm. A wider body normally results in better shoulder room and a higher roof makes ingress & egress easier. A longer wheelbase usually results in more cabin space. It has a boot space of 240 litres. A larger boot allows you to carry more luggage. Alturas G4 has a 244mm ground clearance, it rides on 255/60 R18 tyres size and has 70 litres fuel tank capacity.

Amongst all the D2-segment SUVs, Mahindra Alturas G4 has the highest ground clearance. Ford Endeavour has the biggest boot in the segment, so it can carry maximum luggage.