The Maruti Suzuki Dzire subcompact sedan launched on May 16, 2017.

The Maruti Suzuki Dzire subcompact sedan is available for sale in India in 4 variants - LXI/LDI, VXI/VDI, ZXI/ZDI and ZXI Plus/ZDI Plus.

Both engines are available with a 5-speed manual and a 5-speed AMT automatic transmission.

The Maruti Dzire’s claimed fuel efficiency stands at 21.2kmpl for the petrol engine and 28.4kmpl for the diesel engine.

The Dzire doesn’t get a cooled storage of any kind, a front armrest and cruise control. These are features that cars like Volkswagen Ameo and Honda Amaze already offer.

Who Should Buy the Maruti Suzuki Dzire?

The Maruti Suzuki Dzire is a well-rounded car in terms of styling, features and mechanical performance. It now even has its own visual identity and no longer looks like a Swift with a boot. If you’ve wanted a small sedan that doesn’t share visual traits with a hatchback, then this fits the bill.

If you want a compact, spacious sedan for back seat comfort, then you should consider the Dzire. The Dzire is also for those who live in far off places and don’t have any other brand’s authorised service center in reach. Maruti Suzuki’s service network is the widest and you certainly benefit from that when you get a Maruti Suzuki.

Those in the commercial sector can also consider the Dzire’s VXI/VDI or higher variant. It offers rear AC vents and rear armrest - features your passengers will certainly appreciate.

For the style conscious, there’s the top variant with LED projector headlamps and LED DRLs, which help it stand out, be it day or night.

Those who want a reliable and/or fuel efficiency sub-4m sedan should also seriously consider the Maruti Suzuki Dzire. If you have to deal with the city traffic, you should get the AMT automatic option and if you cover a lot of miles, then you can go with the diesel engine with the automatic transmission.

The Maruti Suzuki Dzire first launched as the Swift Dzire back in 2008. It was based on the second-generation Swift hatchback. Its second generation dzire launched in 2012 with a smaller boot to fit within the stipulated 4m length and qualify for lower taxes.

The third generation Dzire launched in May 2017 with a lot more proportional side profile. In 2019, the Dzire’s petrol engines gained BS6 compliance.

The Maruti Suzuki Dzire competes with the likes of the Honda Amaze, Tata Tigor, Hyundai Xcent, Ford Aspire and Volkswagen Ameo. The Dzire is in the number 1 position while the Honda Amaze is in a distant second spot. All the others are barely in the race. 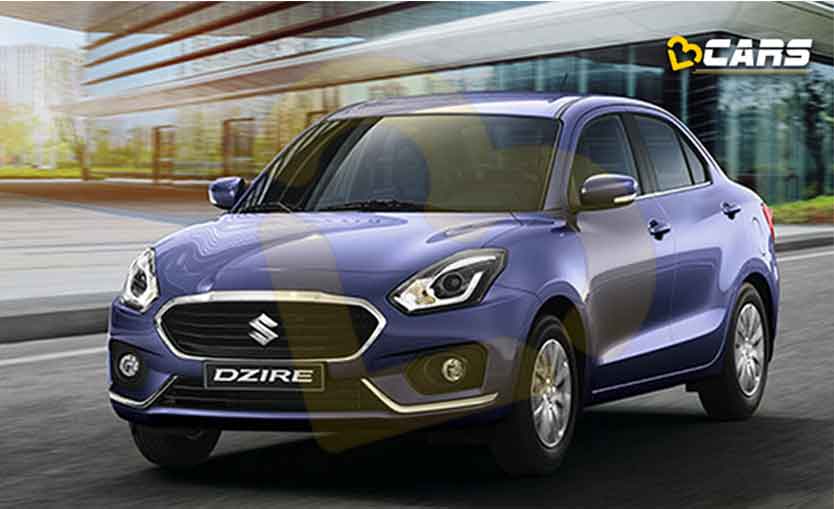 Leaked: Maruti Dzire Tour S CNG To Be Priced At IN