V3Cars reviews all the petrol variants of the 2021 Tata Altroz to give you a better idea about which variant offers the best value for money. The Altroz is available with a 1.2-litre normal and turbo-petrol engine, paired with a manual transmission only.

What Are The Prices of 2021 Tata Altroz Petrol?

What Are The Engine Specifications of Tata Altroz Petrol?

As far as normal petrol engines are concerned, the Baleno and Glanza (which are essentially the same) offer segment-best power:weight and torque:weight ratios. The Baleno and Glanza also offer the best claimed fuel efficiency of the lot, when paired with the manual transmission.

What Are The Dimensions of Tata Altroz Petrol?

The Altroz’s lower variants come with 14-inch wheels with only 165-section tyres, but similar to the rest of the cars in this segment, the Altroz’s top variant comes equipped with 16-inch alloy wheels.

What Are The Features of Tata Altroz XE Petrol Variant?

The Altroz petrol’s base XE variant is priced at around Rs 5.70 lakh. It has received the highest 5 star adult safety rating from Global NCAP. The XE variant offers all the standard safety features, apart from which it also gets safety features like central locking and impact sensing auto door unlock.

In terms of functional features, Altroz XE gets multi drive modes, which let you alter the engine’s characteristics to offer enhanced performance or better fuel efficiency. Apart from these, the base variant also offers features such as front power windows, tilt steering, front power outlet and umbrella holder.

This variant comes with body coloured bumpers and door handles, but the ORVMs are done in black colour. It gets 14-inch steel wheels without wheel covers.

Hence we recommend that you consider choosing a higher variant and give a miss to the base XE variant.

What Are The Features of Tata Altroz XE Rhythm Petrol Variant?

The Altroz XE also comes with a Rhythm pack. The XE Rhythm is Rs 25,000 more expensive than XE. The Rhythm pack adds in a music system, 4 speakers, remote key and dual-tone horn.

The XE Rhythm pack’s additional features are worth the extra premium of Rs 25,000. However, the it also lacks some must-have features, so we don’t recommend buying the Altroz XE Rhythm either.

What Are The Features of Tata Altroz XM Petrol Variant?

The Altroz XM is Rs 36,000 more expensive than the XE Rhythm pack.

The XM variant adds-in a few features over the XE Rhythm, which include rear power windows, electrically adjustable and auto folding ORVMs, rear parcel tray and driver side footwell lighting.

However, the XE Rhythm offers 3 additional features that are missing in the XM variant. These features are mentioned in the table below:

Although the XE Rhythm and XM variants’ price difference has been lowered now, the incremental cost for the added features of the XM variant is still on the higher side. Hence, for its missing features and asking price, we would not recommend the XM variant.

What Are The Features of Tata Altroz XM+ Petrol Variant?

The Altroz XM+ variant is Rs 30,000 costlier than the XM variant.

This variant comes with a handful of added features including a touchscreen infotainment system with Apple CarPlay, Android Auto support and steering-mounted audio controls. Apart from these, there’s remote central locking, follow-me-home headlamps and 16-inch wheels with full wheel covers.

For its added features, the additional premium of Rs 30,000 of the XM+ variant is completely justified. Even after adding all these features in the package, the XM+ still misses a couple of basic features like rear speakers and day/night IRVM, but that’s not a big deal, as these can be easily retrofitted.

If you wish to buy a basic and affordable variant of the Tata Altroz, then we recommend that you at least choose the XM+ variant. However, for the value-conscious buyers who wish to have the must-have modern-day features and can stretch the budget, we do not recommend the XM+ variant.

What Are The Features of Tata Altroz XM RHYTHM + STYLE Petrol Variant?

For these additional features, the extra premium of Rs 34,000 of the XM Rhythm + Style variant is almost justified. However, this variant’s added features are not compelling enough to consider it over the XM+ variant. If you wish to get modern-day features in the Altroz in order to enjoy a better ownership experience, then we suggest you consider choosing a higher variant over this variant.

What Are The Features of Tata Altroz XT Petrol Variant?

The Altroz XT variant is Rs 19,000 costlier than the XM Rhythm + Style.

After the Altroz XE base variant’s price increase, the XT variant is the best value-for-money proposition among all the lower variants of the Altroz. So, if you have a strict budget and are value-conscious, then we ideally recommend that you at least go for the Altroz XT variant.

The XT variant offers a number of must-have features along with some good-to-have features. Hence, it will offer a better ownership experience as compared to any lower variant.

The XT variant is now available with a turbo-petrol engine option as well, for which you would need to shell out Rs 60,000 more.

The XT Turbo petrol comes with the Sport drive mode option instead of the Eco mode. However, with the turbo petrol engine, this variant comes only with 14-inch steel wheels wrapped in 165-section tyres and without wheel covers.

For this engine and the added features, we think that the incremental cost of Rs 60,000 is on the higher side, considering it also gets smaller tyres. If you are really looking to buy the Altroz with a turbo-petrol engine, then we would recommend that you stretch the budget till the XZ variant, which we will discuss later in this writeup.

What Are The Features of Tata Altroz XT Luxe Petrol Variant?

The Altroz XT Luxe is Rs 39,000 more expensive than the XT variant.

You can check all the added features of the Tata Altroz XT Luxe variant in the table below:

If you are looking to choose this variant to get features like height adjustable driver seat and rear armrest, then we would suggest that you give a miss to the XT Luxe and consider the XZ instead.

What Are The Features of Tata Altroz XZ, XZ(O) & XZ Urban Petrol Variant?

The Altroz XZ comes for an additional premium of Rs 18,000 over the XT Luxe variant.

The XZ variant adds-in several features in the overall package. Some of the key features are automatic projector headlamps, rain sensing wipers, rear wiper and defogger and front armrest. To offer enhanced comfort for the rear passengers, there are features such as rear AC vents, adjustable headrests and rear power outlet.

It is worth noting that the XZ variant does not get the contrast roof and body coloured ORVMs that are available on the XT Luxe.

According to our internal data, the XZ variant’s added features easily justify its incremental cost of Rs 18,000 over the XT Luxe. In fact, the Altroz XZ is even better than the XT variant in terms of value. If you wish to buy the normal petrol engine option, then it would be sensible to choose the XZ variant over the XT.

The Altroz XZ variant also offers 2 options to the buyers to cosmetically enhance the visual appeal of the car, these are namely -- the XZ(O) and the XZ Urban. The XZ(O) adds in only a contrast black roof for which you’ll need to spend an additional Rs 15,000. The XZ Urban offers the added style features of body-coloured ORVMs and body coloured inserts on the inside, for which you will need to shell out Rs 30,000 extra.

As these 2 packages of the XZ variant only add an enhanced sportier look to the car -- it is entirely your decision whether or not you wish to go for these by spending extra premium.

The XZ variant is also available with a turbo-petrol engine option, which costs Rs 75,000 more than the normal petrol engine powered counterpart.

The Altroz Turbo XZ variant is Rs 72,000 more expensive than the XT Turbo.

All the additional features of the Tata Altroz XZ Turbo over the XT Turbo variant are mentioned in the table below:

For these added features, according to our internal data, the price increment of Rs 72,000 of the XZ Turbo is easily justified. Hence, when it comes to the turbo-petrol engine, we would strongly suggest that you choose the XZ Turbo, so that you get a better engine and overall a more complete car.

What Are The Features of Tata Altroz XZ+ Petrol Variant?

This variant primarily adds-in feel-good features. So, it is entirely up to you to decide whether you wish to choose this variant or not. To offer these feel-good features, Tata is charging some premium, but it’s not too much. Hence, if these features matter to you, then you can certainly consider it, as it does not compromise on value.

If you wish to buy a non-turbo variant of the Altroz, have a strict budget to follow and are considering only a lower variant, then the XM+ variant is suitable for you. This variant’s major missing features include rear speakers and day/night IRVM, which can be retrofitted.

If you can stretch your budget to go above the XM+ variant, then the XT is the best variant to buy with the normal petrol engine. This variant covers all the basic features along with some good-to-have features, and you will not compromise much on value either. Choosing this variant with the turbo-petrol engine is not sensible.

Above the Altroz XT non-turbo variant, the sensible choice would be to go directly for the XZ turbo variant. This jump will cost you an added Rs 1.32 lakh. However, as per our internal data the XZ variant’s added features completely justify this incremental cost. Thus, you will not be compromising on value by choosing the Altroz turbo XZ variant, and you will also get better performance and drivability.

What Are The Colour Options of Tata Altroz 2021? 2021 Toyota Fortuner & Legender Variants Explained - Which One To Buy? 2021 Citroen C5 Aircross Variants Explained - Which One To Buy? 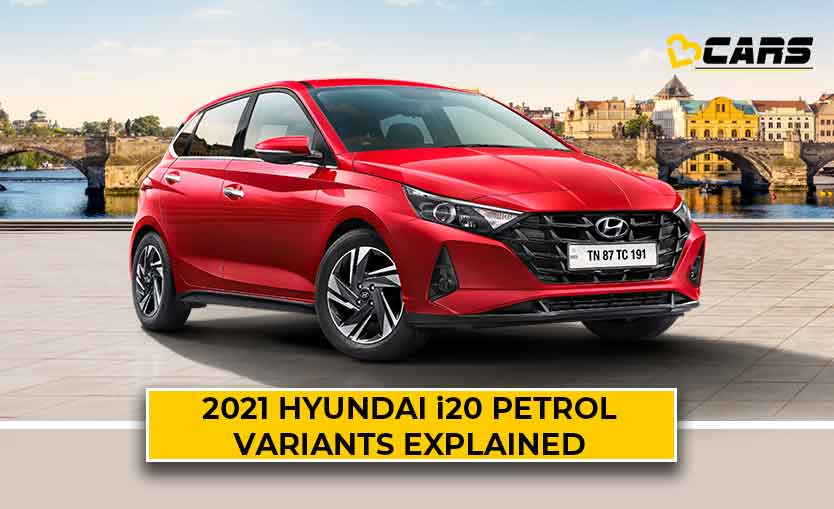 2021 Hyundai i20 Petrol Variants Explained - Which One To Buy? 2021 Skoda Superb Variants Explained - Which One To Buy?