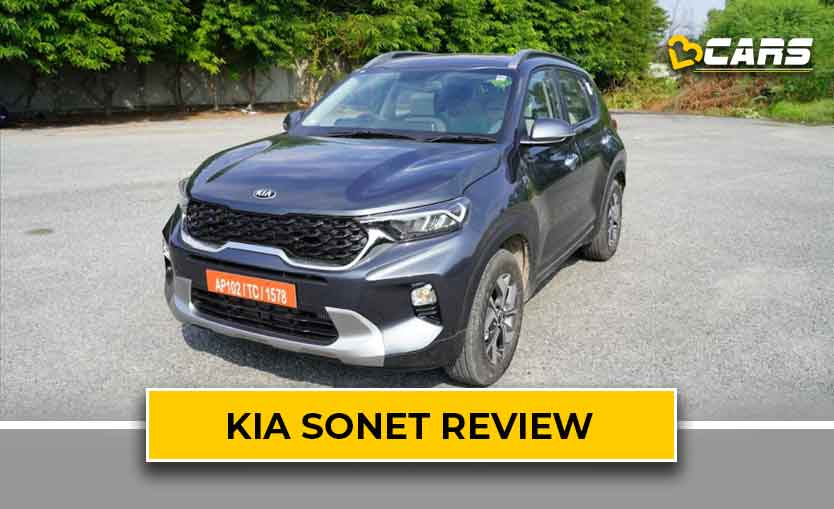 Here’s our first-drive review of the Kia Sonet. The highlight of the Sonet’s design is that it looks bigger than it actually is, whether you look at it from the front or back. A raised front stance makes it look imposing, along with a carefully sculpted bonnet and angry-looking headlight design. Headlamps are LED units, and they have an attractive internal design. These get integrated dual-function LED DRLs and turn indicators that look stylish. The fog lamps are halogen projector units, so these emit yellow light while headlamps give out white light. It goes without saying that the Sonet gets Kia’s standard tiger nose grille. The Sonet is based on the same platform as the Venue, but it is wider and taller. Its 205mm of ground clearance (15mm more than the Venue) should be enough to deal with most uncertainties that you’d encounter on the road.

Sonet’s plastic cladding runs along the side of the car and gets a chrome/red insert below the doors. It gets flared wheel arches, and these add to the muscle. We feel the design around the C-pillar could have been better, as it is the only part from where the Sonet feels like it’s shrunk to make the overall length fall under 4 metres.

Like its front, the Sonet’s rear also looks wider than it actually is. The highlight element at the back has to be the LED tail lights, that are connected by a reflecting strip. We would have liked if the reflector strip and the turn indicators at the rear could also have LED lights -- those would have made it look more upmarket. The Sonet’s top GTX+ variant gets elements that are unique to the GT Line trim, like red brake callipers and red inserts on the front and rear bumper, on the side cladding and on the alloy wheels. This version also gets a differently designed front bumper and black faux skid plate at the rear. Sonet’s 10.25-inch touchscreen infotainment system housed in an extension of the instrument cluster grabs attention as you enter the cabin. It’s a floating-type unit, but doesn’t block the driver’s field of view. However, the dashboard itself is set so high that some drivers will find it hard to assess the car’s front extremes.

There are no physical controls for the touchscreen and there are AC controls between the central air-con vents. It is easily accessible for the driver as well as the front passenger.

The center console is a two-step unit; the higher pedestal is reserved for wireless charging in the top variant and in the lower variants it can be used to keep a smartphone. It is worth noting that Kia offers cooling vents near the wireless charger to make sure the phone doesn’t heat up. The lower part that has a USB charging facility also has space to keep a smartphone. There are two cup holders and a smartphone holder in between the front seats as well. Both the front doors have a bottle holder and an umbrella holder. The front seats are supportive and will be adequate for drivers that are around 5’8” tall and weigh around 70kg. The HTX+ variant, top variant of the HT Line trim, gets ivory-black dual-tone interior while the GTX+ variant gets a black cabin. The silver inserts in the HT Line variants are replaced by glossy black finish in GT Line. The GT Line also gets red stitching for leather seats and leather-wrapped steering.

Both the trim levels get a digital instrument cluster with a coloured MID that reads fuel efficiency, displays directions (for in-built navigation) and tripmeter. While it may look sporty to some, we feel a conventional analog cluster would have looked better, at least in the HT Line variants that look less sporty and more corporate. Sonet gets a 10.25-inch touchscreen infotainment system in the HTX+ and GTX+ variants. It is equipped with Apple CarPlay and Android Auto functionality, and can also pair two phones simultaneously using Bluetooth. There’s no lag while using the touchscreen and smartphones pair seamlessly with the system. If two smartphones are paired using bluetooth, only one can be used for playing audio and the other can be used for calling. If a single phone is connected for both the purposes, then the other smartphone will have to be disconnected. The switch between calling and audio playback is seamless. Audio output is immersive, courtesy Bose. This 7-speaker unit includes a subwoofer in the boot, and despite that the Sonet offers 392 litres of boot space. There’s a 15-inch steel spare wheel in the boot. You don’t get a 60:40 split rear seat, so the only option to increase the boot space is by folding the rear seat, which doesn’t fold flat either. Sonet offers a comfortable ingress, however, its thick side cladding is likely to rub against your leg while exiting the car from the rear seat. The second row gets two adjustable headrests and an armrest with cupholders. Rear occupants also get AC vents and USB charging, along with storage space for keeping one smartphone. The front passenger seat back offers two pockets for extra storage.

Sonet offers slightly more shoulder room than the Venue -- it’s also the wider of the two. However, the rear seat is comfortable for two passengers only. Accommodating three passengers in the rear will be a squeeze. Even if you do, the middle passenger won't be comfortable for longer rides because of the bulging backrest (due to armrest). There's also no head rest or a 3-point seatbelt for the fifth occupant. The quarter glass on the Sonet somewhat helps make the cabin feel airy. Sonet’s 1.0-litre turbo-petrol engine offers a peak torque of 172Nm from 1500rpm. It offers decent drivability even when you’re not in the torque band. And the torque builds in a linear manner offering healthy, but manageable acceleration from 2000rpm for drivers of varying expertise.

This engine is available with an auto-clutch manual transmission (ACMT) and a 7-speed dual-clutch type automatic transmission. The auto-clutch transmission doesn’t require a manual clutch input, but you still need to manage the gears using the standard H-pattern shifter. If you’re used to driving a full-manual transmission car, then it’s easy to quickly get used to changing gears without the clutch pedal.

Gear changes are smoother if you take your foot off the accelerator while shifting. New and seasoned drivers will be able to use auto-clutch manual transmission like any regular manual transmission. New drivers will also appreciate not having to bother with carefully modulating the clutch pedal in stop-and-go traffic or worry about stalling the car.

The DCT offers quicker gear shifts and some drivers will like it more. The gear shifts are smooth in automatic mode and quick when manually changing gears with the stick. Kia says Sonet 1.0 DCT is quicker than the Sonet 1.0 iMT to 100kmph from a standstill by 1 second. Those who want complete automation of gears will appreciate the DCT more.

We didn’t get to drive the Sonet for long, and over different surfaces. However, whatever road inconsistencies came our way, the car handled them well. The braking also seemed fine at all sane speeds.

The Sonet is a well-balanced package: its design masks its small size, it has a high ground clearance, there’s a potent turbo-petrol engine on offer with two transmission options, the interior seems well put together and the cabin space is acceptable for a car of this size. It’s hard to find a major miss that will put most buyers off for this car. The only thing that can go wrong now for the Sonet is its pricing, but we’re not expecting that to happen given how sensibly Kia has priced the Seltos.