The XC40 is Volvo’s entry-level SUV. In the compact luxury SUV segment, it rivals the likes of the BMW X1, Mercedes-Benz GLA and Audi Q3. Volvo has now discontinued the diesel engine from the XC40 portfolio and added a petrol engine. We drive the petrol XC40 to find out whether you should still consider buying it or not.

Size-wise, the XC40 is the widest and the tallest car in its segment, measuring 1863mm in width and 1652mm in height. As far as the overall length is concerned, it falls behind the BMW X1 by only 14mm. So, if just the size is a measure of road presence for you, the XC40 stands atop in this segment. At 2702mm, its wheelbase is also the longest amongst its competitors, although the GLA is not too far behind.

The XC40’s boxy exterior is made to look sporty in this R-Design variant. It gets dual-tone paint scheme, but apart from the black roof, which comes to notice instantly, the XC40 R-Design also features glossy black front grille and black skid plates in the front. There are black ORVMs, black roof rails and R-Design lettering on the sides and black skid plates at the rear. Some of the other elements that catch fancy in not just XC40’s R-design version, but in general are its Thor’s hammer inspired headlamps, large panoramic sunroof, waterfall inspired tail lamps and dual rear exhausts.

In comparison, the Mercedes-Benz GLA looks more like a crossover because of its sloping roofline, and while both the X1 and Q3 are more SUVs than the GLA in that respect, it’s the Volvo that justifies the SUV badge more than its rivals thanks to its upright front design and squarish exterior. The R-Design variant doesn’t add much to enhance the SUV quotient in the XC40, but makes it look more youthful. We’d have liked if Volvo had offered the Inscription or Momentum variant as well, particularly for those who’re inclined more towards premiumness or richness than sportiness.

The R-Design package is all about making the XC40 look sporty, and in order to do that, the interior has been done in all-black scheme. There’s the R-Design specific leather seats, steering wheel, gear knob, pedals and scuff plates to add to the aura.

Get inside the XC40 and what immediately comes to notice is its 9-inch touchscreen infotainment system surrounded by tall air vents on either side. An aluminium-finished insert runs throughout the width of the dashboard, and while it catches fancy, it is by far the only element that somehow feels less expensive than everything else in the cabin. Quality inside is otherwise top-notch, whether it’s the various plastics that have been used, the soft finish behind the steering-mounted paddle shifters, the dampness in the operation of buttons, the materials used for operating air vents and even the lining in the door pockets. One thing that needs a special mention is the seats; these are supremely comfortable, both at the front and the back. The front seats get 12-way electric adjustment with 2 memory options for the driver’s seat, and there’s manual adjustment for extending under-thigh support as well. The one thing that some might complain about in the XC40 is that, despite being the largest in its class, it doesn’t feel spacious. Although there’s adequate space for 4 grown-ups here. The culprit is likely to be the rather small windows and the small size of the doors. The black interior theme further enhances the feeling of space crunch.

The XC40’s rear seat base also isn’t really wide, as if it was meant to be a four-seater only. Rear passengers don’t even get grab handles, quite unusual since these are there at the front. The rear door pockets are also not large enough for 1L water bottles and there’s only a type-C charging socket for rear passengers. The message then seems loud and clear: if you’re buying the XC40, it’s because you’ll be driving it yourself. 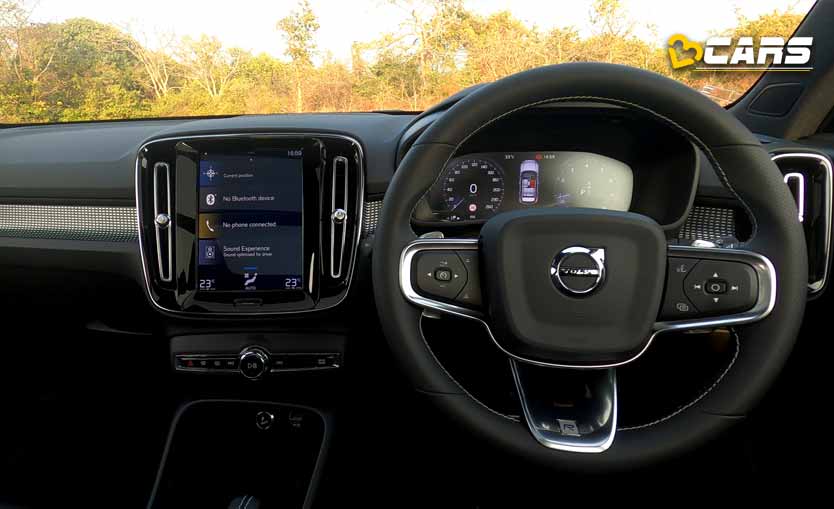 Back in the front, the storage spaces impress you. There are large door bins that are a result of the speakers being situated a little higher on the front doors, cardholder in the dashboard, bag hook in the glovebox, front armrest with removable storage, a storage box under the driver’s seat and folding boot floor.

We’d sum up the XC40’s interior by saying that it is driver-centric. And that’s not a bad thing for a car that has a sporty written all over it.

The Volvo XC40 petrol gets a 2.0-litre engine that makes 190PS of maximum power, just 2PS short of the most powerful car in the segment -- the BMW X1. The XC40’s engine delivers 300Nm of peak torque, equivalent to the GLA’s 2.0-litre engine and higher than the X1 and Q3’s petrol engines. Since all these petrol luxury compact SUVs feature a 2 wheel drive setup only, the Volvo is on par with the X1 and the GLA on paper. The Q3, with its 1.4-litre petrol engine, is the weakest in this comparison. So, how do these numbers translate on the road₹Let’s find out. The XC40 T4 R-Design feels neither too quick nor too slow. The 2.0-litre petrol engine works best when you’re cruising. It has enough power in the store to pull an overtaking manoeuvre at high speeds. While pushing the car, even in the Sports mode, the engine note that is audible inside the cabin would want you to believe that you’re going faster than you actually are. The XC40’s ride and handling complement the petrol engine’s characteristics: as long as you’re not pushing it to the extreme, it is comfortable. So, the sporty intent that you see in the R-Design version on the outside and inside is more a cosmetic thing, and Volvo never promised exhilarating performance either, so we’re not disappointed.

The petrol XC40 is available in just one R-Design variant, and it gets a host of safety and functional features. Starting with safety, the most decorated feature is adaptive cruise control - it is the one in which the XC40 would increase or lower its speed by itself to maintain a set distance from a vehicle in front. It works up to speeds of 130kmph. We didn’t get an opportunity to test this feature. The other important feature is city safety, which has been there in Volvo cars in India for quite some time now. It can identify other vehicles, pedestrians, cyclists and large animals ahead, even at night, and can warn you if a collision is imminent. If the driver doesn’t respond, then it can also apply the brakes to avoid the collision. This feature works at speeds of up to 30kmph and only if the difference in speed between your car and the object it could crash into is less than 15kmph. There’s also the LED bending headlights that change the direction of the beam according to steering wheel inputs, and it’s quite handy in places like Goa where you have a lot of curvy roads.

The list of key entertainment features includes a 9-inch touchscreen infotainment system, which is extremely intuitive to use. It features Apple Car play connectivity only and Android Auto is yet to be a part of the mix. It is coupled with an audio system by Harman Kardon, and its output is rich. The list of functional features seems unending, but some of the more useful ones that we found are 12.3-inch digital instrument cluster with navigation display, powered tailgate and wireless phone charging.

The XC40 R-Design comes in silver, white, black, blue, red & grey colours. All of them get the dual-tone treatment.

The XC40 has always fit the bill as a secondary luxury car, either for family or for someone’s own daily commute. With the introduction of petrol engine, its initial ownership cost has now gone down compared to the diesel version. So that makes it a more convincing purchase. It was always amongst the better-looking SUVs in its segment, and in the R-Design variant, it now looks sportier and more youthful than its counterparts. The only thing that we now want Volvo to do is to offer the XC40 petrol in some other variant like Momentum or Inscription, for those seeking sophistication over sportiness.