V3Cars reviews all variants of the 2021 Ford EcoSport to give you a better idea about which variant offers the best value for money. The EcoSport is available with a 1.5-litre petrol engine, paired with either a manual or a torque converter type automatic transmission.

What Are The Prices of Ford EcoSport 2021?

The newly introduced SE variant’s petrol-manual powertrain version costs Rs 10.49 lakh, while its diesel-manual version is tagged at Rs 10.99 lakh. The corresponding petrol and diesel variants of the EcoSport have a price difference ranging from Rs 20,000 to Rs 70,000. The EcoSport petrol version with automatic transmission option is available in only the top Titanium+ variant, which is priced at Rs 11.19 lakh.

The following table offers a look at the pricing details of the 2021 Ford EcoSport variants:

What Are The Engine Specifications of Ford EcoSport?

The EcoSport petrol is equipped with a 1.5-litre engine that produces 122PS of maximum power and 149Nm of peak torque. Apart from the EcoSport, the Venue, Magnite, Kiger, WR-V, Brezza, Urban Cruiser and Sonet get powered by normal petrol engines in this segment. Among all the cars, the EcoSport, Magnite and Kiger come with 3-cylinder engines, while the rest have 4 cylinder ones. The EcoSport offers the segment-best power and torque outputs, but its claimed fuel efficiency is the least in the segment.

You can check all the specifications of the regular petrol engine of the 2021 Ford EcoSport and comparison with its rivals in the table below:

The Sonet, Venue, Magnite, Nexon and XUV300 also come with 3-cylinder turbocharged petrol engines. In comparison to these as well, the EcoSport is the most powerful. Nevertheless, in this case, the EcoSport’s torque:weight ratio is the least among these cars, while it is also the least fuel efficient of the lot.

You can check all the specifications of the turbo charged petrol engine of the 2021 Ford EcoSport and comparison with its rivals in the table below:

The EcoSport packs in a 1.5 litre diesel engine that delivers 100PS of maximum power and 215Nm of peak torque. Its power:weight and torque:weight ratios are the least amongst all its rivals. In this segment, only the EcoSport diesel comes paired with a 5-speed manual transmission, while all the other diesel cars get a 6-speed unit. The EcoSport diesel version’s claimed fuel efficiency is only better than the XUV300 in the segment.

The following table offers all the specifications of the diesel engine of the 2021 Ford EcoSport and comparison with its rivals:

What Are The Dimensions of Ford EcoSport?

The EcoSport is a B2-segment SUV, and thus, its overall length (without the spare tyre) is around 4m. It is wider than the WR-V, Magnite and Kiger, but is the tallest car in the segment. Except for the XUV300 and WR-V, the EcoSport offers the longest wheelbase in the lot. It has a boot space of 352-litres, which is similar to that of the Venue and Nexon. It has a ground clearance of 200mm, which is the same as of Brezza, but it is lesser than the Sonet, Nexon, Magnite and Kiger. The EcoSport comes with 15- and 16-inch wheel options.

You can view the dimension details of the 2021 Ford EcoSport along with comparison with its rivals in the table below:

What Are The Features of Ford EcoSport Ambiente Variant?

The base Ambiente variant of the EcoSport is priced at Rs 7.99 lakh with the petrol engine, while the diesel version is tagged at Rs 8.69 lakh.

This variant gets body-coloured bumpers, but door handles and ORVMs are black. There’s 15-inch steel wheels with full wheel covers as well. It is worth noting that the EcoSport Ambiente gets a black interior.

You can check out the safety and style related features of the 2021 Ford EcoSport Ambiente variant in the following table:

The EcoSport also offers an audio system with 4 speakers starting right from the base variant. Some of the key functional features of the base Ambiente variant include: tilt and telescopic steering, front and rear power windows, adjustable rear headrests and electrically adjustable ORVMs.

The table below offers a look at all the entertainment and functional features of the 2021 EcoSport Ambiente variant:

The EcoSport Ambiente base variant lacks some of basic features, such as remote central locking, steering-mounted audio controls and body-coloured door handles and ORVMs.

Whether you should settle for the EcoSport Ambiente base variant or go for the next Trend variant, we shall discuss after looking into the latter’s details.

What Are The Features of Ford EcoSport Trend Variant?

The EcoSport Trend variant costs Rs 65,000 more than the Ambiente variant with the petrol engine, and Rs 45,000 more in case of the diesel version.

The table below offers a look at all the additional features of the 2021 Ford EcoSport Trend variant over the base Ambiente variant:

As per our internal data, the Trend variant’s added features justify the additional premium of Rs 65,000. So in case of both petrol and diesel versions, we recommend the Trend variant over Ambiente, as it offers all basic features as well as some good-to-have features without compromising on value.

We would have liked it better, if the Trend variant’s infotainment system also offered Apple CarPlay and Android Auto connectivity options.

What Are The Features of Ford EcoSport Titanium Variant?

Some of the key functional and style related add-ons in this variant are:

You can view all the additional features of the 2021 Ford EcoSport Titanium variant over the Trend variant in the table below:

According to our internal data, the Titanium variant’s additional features are worth more than its incremental cost of Rs 1,15,000. For its added safety and good-to-have features, choosing this variant will be a sensible decision, and this is true for both petrol and diesel versions.

What Are The Features of Ford EcoSport Titanium+ Variant?

The EcoSport Titanium+ variant is only available with petrol-automatic powertrain, and costs Rs 1.40 lakh more than the petrol-manual Titanium variant. As its price is over the Rs 10 lakh slab, in some states it will attract more tax, and as a result, the Rs 1.40 lakh price difference between these two variants will eventually go up to Rs 2 lakh.

Apart from offering an automatic transmission, the Titanium+ variant also has paddle shifters, and 2 important safety features -- side and curtain airbags and auto-dimming IRVM.

The following table lists all the additional features of the 2021 Ford EcoSport Titanium+ variant over the Titanium variant:

According to our internal data, the incremental cost of around Rs 2 lakh for the extra features and automatic transmission of the Titanium+ over the Titanium variant, is completely justified.

What Are The Features of Ford EcoSport SE Variant?

The SE variant gives a miss to the boot-mounted spare wheel, but comes with the puncture repair kit instead.

Apart from these, there are also some important add-on functional features in this variant, such as -- rain sensing wipers, auto headlamps, cruise control and 60:40 split rear seat with armrest.

In terms of entertainment, the EcoSport SE offers an 8-inch touchscreen infotainment system along with Apple CarPlay and Android Auto support.

You can see all the added features of the 2021 Ford EcoSport SE variant over the Titanium variant in the following table:

As per our internal data, the SE variant’s incremental cost of around Rs 80,000 over the Titanium is justified. In case of the petrol version, for the additional safety features it is logical to pay this extra premium. However, for the diesel version, we suggest that going for the Titanium variant instead will be more sensible.

What Are The Features of Ford EcoSport S Variant?

Over the SE, the top S variant primarily adds-in style related features for more premium look and feel. These include - black front grille, roof and roof rails, and leather seats with black-orange interior.

Apart from these there are other additional functional features such as isofix and puddle lamps.

All the additional features offered by the 2021 Ford EcoSport S variant over the SE variant are listed in the following table:

In case of the petrol engine option, you can consider the top S variant for its exclusivity, but it is not a sensible choice in case of the diesel version.

Let us sum up all the variant-wise recommendations on the 2021 Ford EcoSport.

In the EcoSport petrol-manual range, our top recommendation remains the Titanium variant. It offers a good balance of all the must-have features and several good-to-have features, and is also the most value-for-money variant.

If you really care for extra airbags and feel-good features, then you may consider the SE variant.

If you wish to get an affordable EcoSport, then we recommend the Trend variant, as it offers almost all must-have features along with a few feel-good features as well, without compromising on the value. Hence, it is definitely a better choice over the base Ambiente variant.

If you wish to buy the EcoSport with the petrol-automatic powertrain option, then the Titanium+ variant is the only choice. This variant is sensibly priced as per its added features and automatic transmission, so you won’t compromise on value.

Here’s a brief look at our variant-wise recommendations on the 2021 Ford EcoSport petrol:

In the EcoSport diesel-manual powertrain range, the Titanium variant is again our top recommendation. If you wish to buy a lower, affordable variant, then you can go for the Trend variant.

In case of diesel, choosing the SE and S variants are expensive propositions, hence we would not recommend them.

Take a brief look at our variant-wise recommendations on the 2021 Ford EcoSport diesel:

What Are The Exterior Colour Options of Ford EcoSport? 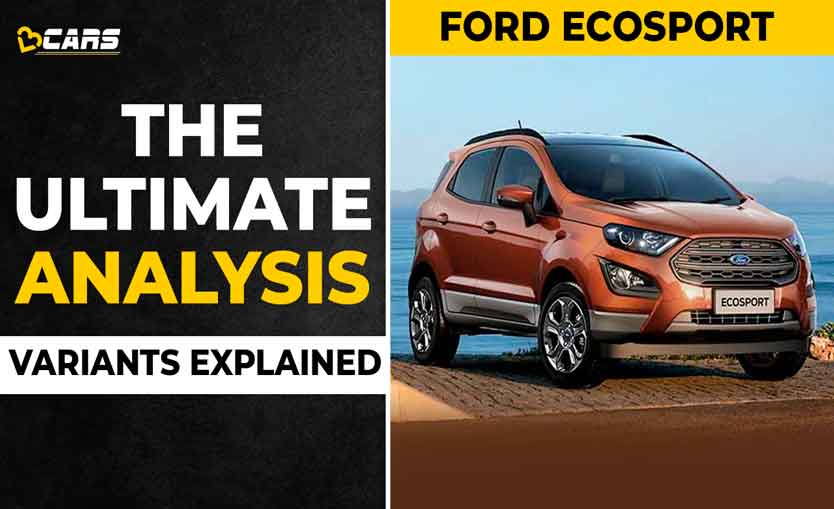 August 2022 - Jeep Meridian Diesel Variants Explained - Which One To Buy?

August 2022 - Tata Tiago CNG Variants Explained - Which One To Buy?