Skoda Kushaq has made its global debut in India. It comes almost a year after Skoda showcased it in its concept form (Vision IN) at the 2020 Auto Expo. The Kushaq is Skoda’s first made-in-India SUV. In terms of design, the Kushaq looks almost identical to the Vision IN concept. Upfront, it features slim LED headlmaps flanking the signature Skoda grille with a chrome surround. The bumper looks muscular with plastic cladding on the lower half and a faux skid plate. Body cladding can be seen all around including the wheel arches.

The side profile looks clean with a sharp character line running across the length. Coming to the back, the Kushaq gets LED tail lamps flanking the SKODA lettering on the tailgate. The Kushaq will be offered in two-wheel sizes. In the lower variants, it will get 16-inch wheels while the top-spec variant will be equipped with 17-inch units.

Underpinning the new MQB A0 IN platform, the Kushaq is 4225mm long, 1612mm tall, and 1760mm wide. It has a wheelbase of 2651mm which is not only bigger than its rivals like the Creta and Seltos (2610mm) but also bigger than the now-discontinued Karoq SUV (2638mm). The Kushaq has a ground clearance of 188m and a boot space of 385 litres which can be further expanded to 1405 litres by folding the 60:40 split rear seats.

Step inside the cabin and the Kushaq looks premium and upmarket. It gets dual-tone black and white upholstery with a piano black finish on the dashboard and the central console. The Kushaq is well equipped on the features front as well. It gets auto LED headlamps, ventilated front seats, rain-sensing wipers, an electric sunroof, wireless charging, ambient lighting, auto AC with rear AC vents, auto-dimming IRVM, bi-spoke multi-functional steering wheel and a 10-inch touchscreen infotainment system with wireless Apple CarPlay and Android Auto.

Here is the list of available engine-transmission options depending on the variant:

Bookings for the Kushaq are set to get underway from June while deliveries are set to begin from July. Prices are expected to range from Rs 10 lakh to Rs 16 lakh. It will take on likes of the Hyundai Creta, Kia Seltos, Renault Duster and the upcoming Volkswagen Taigun. 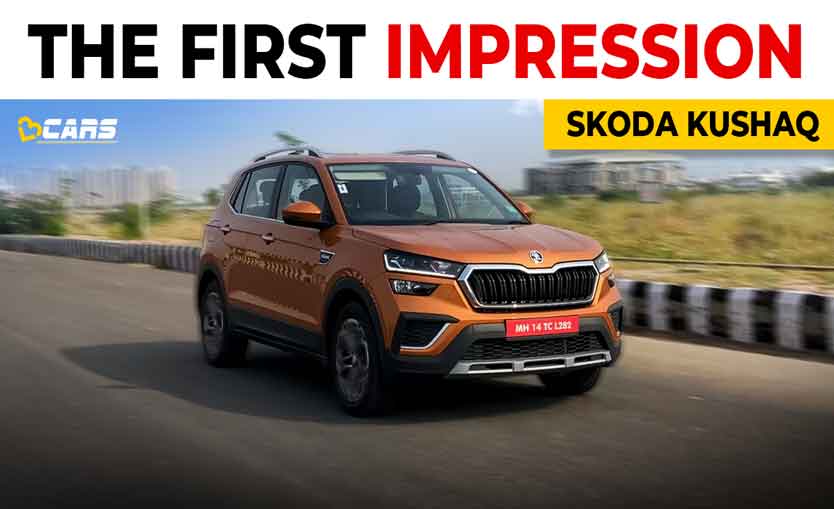