Skoda’s upcoming Rapid replacement has been spied testing yet again. Although the test mule was heavily camouflaged as always, it gave us a glimpse of the sedan’s new interior for the first time. 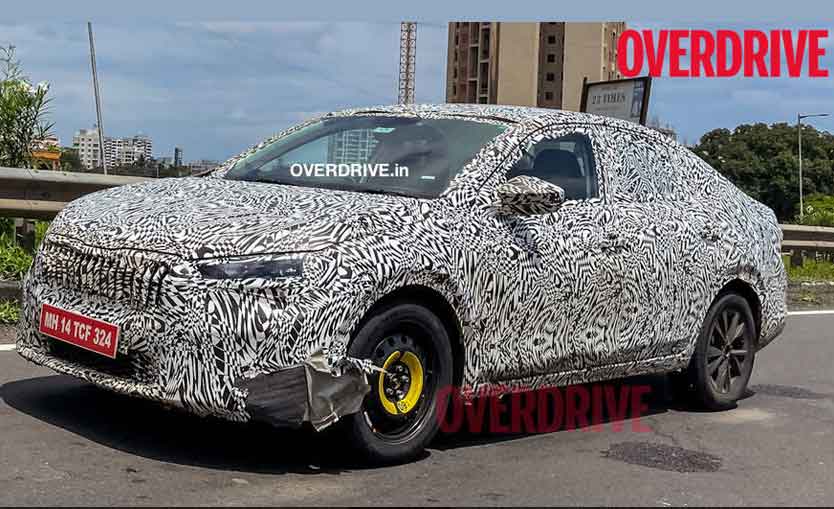 The Slavia gets a two-spoke steering wheel similar to what we have seen on the Kushaq. While other elements of the interior remain under wraps, expect the Slavia’s cabin to look largely similar to other modern Skoda cars, especially the Kudhaq. Expect a 10.1-inch touchscreen infotainment system to sit at the top of the central AC vents while controls for the auto AC placed right below it.

Other features that are expected to make way to the Slavia including connected car tech, auto AC, auto LED headlamps, rain-sensing wipers, ventilated front seats, wireless Apple CarPlay and Android Auto, up to 6 airbags, front and rear parking sensors, electronic stability control, hill launch assist and a tyre pressure monitoring system. Skoda might not offer an electric sunroof on the Slavia as it is doing with the new Octavia.

Talking about the exterior, the test mule spied was a higher variant of the sedan as it had alloy wheels. In terms of design, it likely to be similar to the recently unveiled Fabia hatchback (not on sale in India) when seen from the front. It will get the signature Skoda Butterfly grille with a thick chrome surround flanked by sleek LED headlamps. The front bumper features a large central air dam flanked by LED fog lamps. At the back, the test mule features sleek LED tail lamps that look similar to the units seen on the new Fabia and other modern Skoda cars.

Based on the new MQB A0 IN platform, the new Skoda sedan will be longer and wider than the Rapid. It is also expected to have a longer wheelbase resulting in better legroom for the rear occupants. The Rapid has a wheelbase of 2552mm which is the smallest in the segment.

The Slavia will not only share its underpinnings with Kushaq but will borrow its engines as well. It will be offered with a 1.0-litre TSI turbo petrol engine (115PS/175Nm) and a 1.5-litre TSI turbo petrol engine (150PS/250Nm). Both the engines will be offered with a 6-speed MT as standard with an option of 6-speed AT and a 7-speed dual-clutch automatic with the 1.0-litre and 1.5-litre engines, respectively.

Skoda has already confirmed that it will debut the new sedan by the end of this year. So, expect it to go on sale in January 2022. Prices are expected to range from Rs 9 lakh to Rs 15 lakh. It will take on the likes of the Honda City (both 4th and 5th gen models), Hyundai Verna, Maruti Ciaz and upcoming sedans like the next-gen Vento and the Toyota branded Maruti Ciaz.