We now have the Maruti Suzuki S-Cross petrol prices. So, let’s compare the prices, dimensions, engine specs and features of the S Cross Zeta variant with the Renault Duster RXZ to decide which car offers better value for money and which one you should buy. 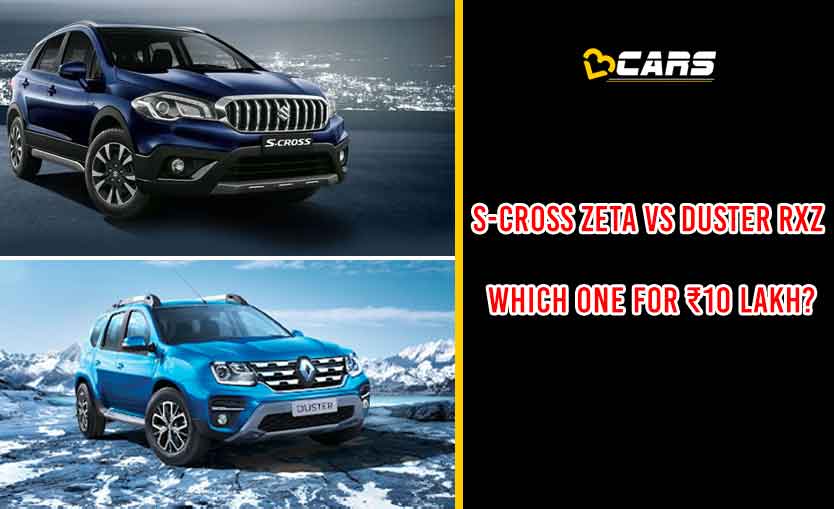 The Maruti Suzuki S-Cross Zeta petrol MT costs Rs. 9.95 lakh - Rs. 5,000 below the psychological barrier of a million rupees. The Duster RXZ petrol with the 1.5-litre petrol engine and 5-speed manual transmission costs Rs. 9.99 lakh. So, these both cars are priced in the same ballpark.

It’s worth noting here that the Duster’s RXZ variant which we’re looking at here is the top variant. Meanwhile, the S-Cross also has the Alpha variant, which is more expensive than the Zeta.

Let’s first go through the common safety features available in these two cars.

Here’s the list of common safety features available in the SCross Zeta and Duster RXZ:

With the common features out of the way, let’s now compare what unique features the S-Cross Zeta and Duster RXZ bring to the table.

Based on your preferences, you may be inclined towards one of these cars but the S-Cross Zeta’s features carry a higher value. These are also near impossible to install later for a reasonable price.

In terms of functional features, we have a lot of common elements shared between these two cars.

The S Cross Zeta and Duster RXZ have the following common functional features:

The S Cross Zeta has a lot of unique features over the Duster. Most of these features, you’ll appreciate during your day-to-day drives. Features like, split rear seatback, telescopic steering, push-button start/stop, sunglass holder, dead pedal and illuminated storage and footwell make a big impact on the ownership experience. The Duster RXZ’ cooled storage and lumbar support are also important but its list of unique features is small. The S-Cross wins this comparison too.

Let’s see if the Duster RXZ can catch up to the S-Cross Zeta with some entertainment features.

Here are the common entertainment features of the SCross Zeta and Duster RXZ:

There are no unique entertainment features for the Duster RXZ and SCross Zeta. Therefore, in this aspect, the two cars are even and there’s no winner.

Let’s see if the Duster RXZ can beat the S Cross with style features.

The Duster RXZ and S-Cross Zeta have the following common style features:

Other than the LED DRLs, the SCross Zeta and Duster RXZ don’t have any important unique features. Just some chrome here and there. We wish these cars offered sunroof and some sporty accents like the Venue Sport and Kia GT line variants.

The S-Cross is as long as the Hyundai Creta but it doesnt look like it because of its crossover styling and poor glass-to-body ratio. Its ground clearance of 180mm is barely enough to qualify to be part of the SUV club and its boot space is also nothing to brag about. These days, B2 segment hatchbacks, sedans and SUVs offer larger storage capacities than the SCross.

On the other hand, we have the Duster. It is significantly wider, longer and taller than the S Cross and will have a much stronger road presence than the S-Cross. The Duster has better wheelbase and boot space too. The Duster also has a legit SUV-spec 205mm of ground clearance. The Duster easily wins the dimensions’ battle.

The Duster easily won the comparison of the dimensions, but beating the S-Cross in performance is going to be tough. The S-Cross hybrid has 1PS less power and 4Nm less torque but its power-to-weight and torque-to-weight ratios are both, better noticeably than the Duster RXZ. So, the SCross will have much better drivability and performance than the Duster.

Then comes the fuel efficiency, which has always been Maruti’s strength and the S-Cross doesn’t disappoint. It offers 30% better mileage per litre of petrol. Imagine saving 30% on fuel costs during your 50,000 - 60,000km ownership period and you’ll start to see why the SCross makes so much financial sense. For comparison sake, let’s assume you get the claimed mileage. In 50,000km, you’ll end up saving Rs. 65,000 with the SCross if petrol costs Rs. 80 in your area.

Not to mention, it’s delivering far better mileage without compromising on the performance. The Duster can’t beat the S-Cross in this comparison of engine performance.

S Cross Zeta vs Duster RXZ - Which Car Should You Buy?

The Maruti Suzuki S-Cross Zeta offers a richer cabin experience with a lot of functional features, which are not available in the Duster RXZ. The biggest boost for the SCross comes from its mileage figure - which is not great but it’s way better than the Duster’s figure of 14.26kmpl.

The only major advantage for the Duster comes from its massive proportions. It looks like its a size larger than the S-Cross and it has the receipts to prove it. Larger boot space and higher ground clearance further add credibility to its SUV stance. But, it doesn’t offer the value for money like the SCross Zeta.

The Maruti Suzuki S-Cross Zeta MT is the one you should buy as it offers a better value for money with more features and far better mileage than the Renault Duster RXZ petrol.