If you’re looking for a car with the biggest boot, here are the top 10 options under Rs. 10 lakh (ex-showroom). To keep all cars on an even footing, we’re considering the available boot space with seating for 5. We’ve also included a bonus 11th car as it almost made it to the list. The Renault Triber sits at the top with 625 litres of boot space while maintaining room for 5 adults. Renault didn’t just make the 3rd-row seats foldable but also removable to achieve this kind of trunk space. Considering that it costs as much as a hatchback, it’s commendable to see this kind of cargo capacity in such a manageable package. If you’re buying the Triber for mostly city use and intend to ferry no more than 4-5 occupants, then it’ll do the job just fine. It can manage occasional highway jaunts even with a full load. However, if you intend to use it that way a lot more frequently, then you should consider the Ertiga or wait for Renault to offer the 1.0L turbo petrol engine.

The Ertiga and XL6 are suitable for those who want better performance and a bit more space inside the cabin. If the Ertiga’s ‘taxi’ image turns you off, then you can consider the Nexa XL6 and also get captain seats in the second row. This setup is ideal for those who mostly travel with no more than 4 adults and want all of them to be equally comfortable. Despite their larger size, the Ertiga and XL6 can’t beat the Triber’s boot capacity in 2-row mode as these cars don’t have removable 3rd-row seats like the Triber.

With the Ertiga, you also have the option of CNG and petrol automatic for under Rs. 10 lakh ex-showroom. Meanwhile, the Nexa XL6 is only available in 1 variant in this budget, but it’s sufficiently loaded. So you won’t miss most of the Alpha variant’s features. Once again, we have 2 cars sharing the third spot. The Nexa Ciaz and older, 4th gen Honda City, both offer a 510-litre boot space. While they both offer a 1.5L petrol engines, they have different characteristics. The Ciaz has a fuel-efficient, hybrid petrol engine with extra bottom end torque from the hybrid tech for easy city drivability. Meanwhile, the City packs a rev-happy engine, which offers most of its torque much higher in the rev range. It’s a lot of fun to rev it to the redline in every gear, but that can get tiring after a while and doing so will also guzzle petrol like crazy.

One area where the City shines is in resale value. The City badge has always commanded a premium in the used car market and established Honda’s long-term reliability. The Volkswagen Vento comes next on the list at 494 litres. It’s an old car that went on sale about a decade ago, but its straight-cut design and clean lines make it timeless. While the Vento’s design, frame and feature list may be old, it now packs a new 1.0L turbo petrol engine. This motor is thoroughly modern and delivers good performance without compromising on fuel efficiency. The Toyota Yaris was a late entrant in the C-segment sedan space, and its high price tag turned off many buyers. The only things going for it are the Toyota badge, a reasonably fat boot and healthy ground clearance. 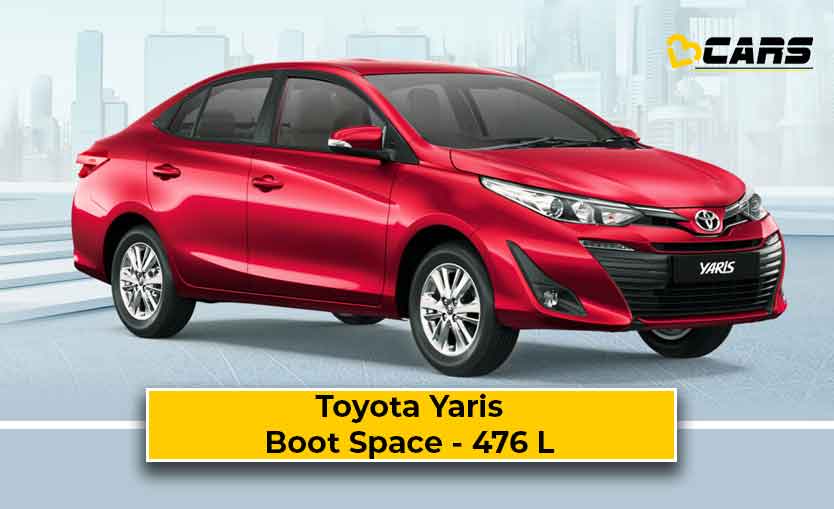 The Renault Duster is almost up there with the Yaris with a 475-litre boot. However, only one of its variants is available under Rs. 10 lakh, and it gets a 1.5L normal petrol engine. The Duster is also starting to show its age, but it still has a road presence like few other SUVs in this price range. Just like the Vento, the Skoda Rapid is also an old car with a new turbocharged heart. At 460 litres, Rapid has a smaller boot than its cousin, the Volkswagen Vento, but unlike the Vento, it’s a lot more affordable. The Rapid’s lower variants are pretty much at the top in terms of value for money, and they offer most of the must-have features as well. For under Rs. 10 L, you can pick any of its lower 3 variants with the manual transmission and even stretch a bit for the Onyx. However, if you want the automatic transmission, then you have only one variant to buy with an Rs. 10 lakh budget - the Rider Plus.

The Kia Seltos and the Hyundai Creta don’t just share the 9th spot but also the frame and engines. Both of these offer 433 litres of boot space. And with either of these cars, you have only 1 variant to pick from. Unfortunately, these bargain-basement variants don’t offer much in the name of creature comforts. But that’s the price you pay for an SUV body style. The Seltos only has 1 variant priced below Rs. 10 lakh ex-showroom. The Honda Amaze takes the 10th spot on the list with a 420-litre boot capacity. The Amaze is the only car on this list that offers both, a petrol and a diesel engine with a manual as well as an automatic transmission. And none of it exceeds Rs. 10 lakh (ex-showroom). The Tata Tigor offers a 419-litre boot space, and it almost made it into the top 10. In fact, if you consider the usable boot space, it may even beat the Amaze. That’s because the Amaze gets C-hinges to hold the boot lid while the Tigor has hydraulic struts, which don’t intrude into the cargo cavity. It’s worth noting that sedans and a couple of MPVs mostly dominate this list. It shows that these cars are a lot more space-efficient and affordable than SUVs. In fact, some of these cars like the Triber, Ertiga and XL6 also offer SUV-like ground clearance with a roomy cabin and exceptional value for money.