Upcoming SUVs In India In 2020

The year 2020 is going to witness a lot of new SUV launches in the Indian auto industry. As SUVs are the continued trend all over the world, we are going to see a lot of new attractive SUV models coming our way. 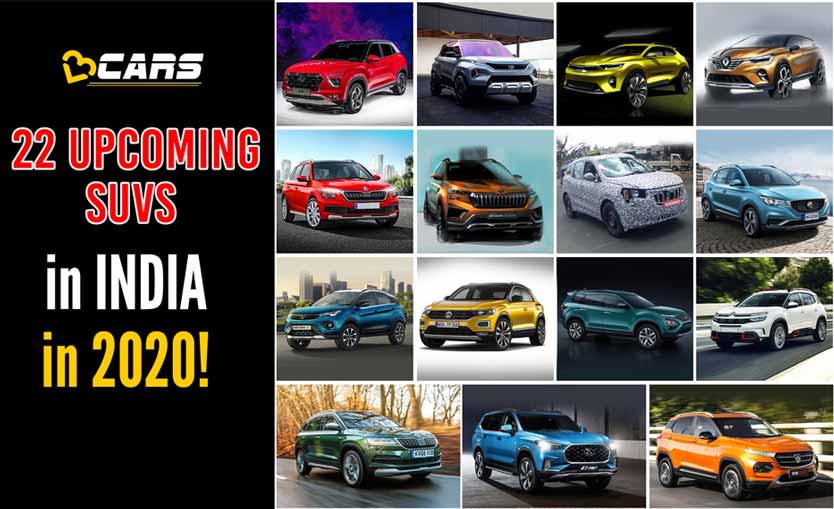 Here’s a look at the SUVs that are most likely to hit the Indian market in 2020.

The Maruti Suzuki Vitara Brezza subcompact SUV launched back in 2016 and has been the segment leader, despite lacking a petrol engine option. The market competition is getting too tough and Maruti Suzuki had already announced to discontinue the 1.25-litre diesel engine when the BS6 norms come into effect in April 1, 2020. Thus, the Vitara Brezza is going to get a thorough mid-life facelift this year, which will include styling updates, new features and a BS6 petrol engine.

The 2020 updated Vitara Brezza might get the 1.5-litre petrol engine that does the duty on the Ciaz and Ertiga. But this would make the Brezza lose its small car tax benefits.

The Vitara Brezza facelift will be unveiled at the 2020 Auto Expo in February. Its sales are expected to begin soon after.

Hyundai is working on the second-generation Creta complete with a new platform, new engines, added features and new design. The Hyundai Creta is expected to borrow its mechanical bits from its cousin - Kia Seltos. Thus, the new-gen 2020 Creta is likely to get the 1.5-litre normal petrol, 1.4-litre turbo petrol and a 1.5-litre turbo diesel engine. All the three engines would be available with a 6-speed manual transmission. The normal petrol engine might get a CVT automatic option, while the turbo petrol engine might get a 7-speed dual-clutch automatic transmission option, and the turbo-diesel could get a 6-speed torque converter automatic option.

The next-gen Hyundai Creta is expected to be showcased at the Auto Expo 2020, and go on sale in a few weeks after the unveiling.

H2X is the codename of the new upcoming SUV from Tata Motors, which is rumoured to be christened as the Hornbill. It might also create another new segment in the Indian SUV market as well, as it is likely to be plonked in between the sub-4m SUVs and the micro SUVs like the S-Presso and Kwid. The Tata H2X is expected to be priced similar to the Maruti Suzuki Ignis.

The Tata H2X is likely to be showcased in its concept form at the Auto Expo 2020 and go on sale later in 2020. This mini SUV is likely to borrow 1.2-litre petrol engine from the Tata Altroz premium hatchback with similar power and torque output.

Kia is preparing to launch its QYI subcompact SUV in 2020, which is speculated to be formally called Kia Sonet.

The Kia Sonet / QYI would share the chassis and engines with its cousin Hyundai Venue. So, the 1.0-litre turbo petrol and a diesel engine are expected on this new SUV. The diesel engine displacement can’t be guessed though. Because the Venue’s 1.4-litre diesel engine is not sure of gaining BS6 compliance. Hyundai’s 1.6-litre engine, on the other hand, will be replaced with the BS6 1.5-litre engine from the Kia Seltos.

The Kia QYI may ditch the 1.2-litre normal petrol engine option, as it is likely to be priced a little higher than the Venue to position itself as a premium subcompact SUV. So, it might be the direct competitor of the Mahindra XUV300, which is also a bit more expensive than the rest of the subcompact SUVs.

The Renault HBC is yet another upcoming SUV that will compete in the highly popular subcompact SUV segment. The HBC is expected to share its platform with the spacious Renault Triber MPV. The Triber’s 2636mm wheelbase could make it the most spacious SUV in the sub-4m segment.

The Renault HBC is speculated to be called the Kiger and is likely to be priced aggressively for the budget SUV buyers. It is not clear if the HBC will borrow the Triber’s engine and transmission as is or get a new turbocharged petrol engine. Even the normal petrol engine from the Triber could suffice for most buyers.

The Skoda Kamiq compact SUV is likely to make its Indian debut at the 2020 Auto Expo.

The Skoda Vision IN is similar in length to the Kamiq. So, this one could make the Kamiq redundant for the Indian market. The Vision IN is confirmed to make a debut at the Auto Expo 2020. Vision IN is not its official name by the way. This made-for-India SUV will get a formal name as it gets closer to its launch sometime in the second half 2020.

The Mahindra XUV500 is facing cutthroat competition in the advent of many compact and mid-size SUVs. In 2020, thus, it’ll come in a new avatar. The XUV500’s charm is fading and it needs a thorough upgrade.

The new XUV500 is likely to come with an aggressive price tag and a longer list of features to beat the competition.

The MG ZS electric SUV is here with a price tag of Rs. 20.88 lakh and Rs. 23.58 lakh for its Excite and Exclusive variants, respectively. The 2020 MG ZS electric SUV will rival the Hyundai Kona. However, a few months after the ZS EV launch, the petrol version could come with 2 engine options. There could be a BS6 compliant 1.5-litre normal petrol and a 1.0-litre turbo petrol engine options, as per a leaked document. The MG ZS petrol will go up against the likes of the Hyundai Creta and Kia Seltos.

The upcoming all-electric Tata Nexon is based on the existing model but it wears the new design similar to the Nexon facelift. Tata has launched the car at a starting price tag of Rs. 14.0 lakh and goes up to Rs. 16.0 lakh (ex-showroom) for the XZ Plus Luxe variant.

The Nexon EV has a claimed range of 312km on a single charge. Its battery pack can charge in about 8 hours from 20% to 100% from a regular power outlet. It’s the most affordable electric car in India with a driving range of more than 200km.

The regular Tata Nexon SUV also recently received a facelift and it now shares its overall design with the Nexon electric. It borrows a flat-bottom steering wheel and sunroof from the Nexon EV. However, it misses out on the full-colour instrument console, which is available in the Nexon electric. But it gains cruise control, which is missing in the EV.

Volkswagen is also preparing to join the compact SUV segment in the country. The T-Roc could rival the Kia Seltos and Hyundai Creta. It’s expected to come with a 1.5-litre turbo petrol and a 1.5-litre turbo diesel engine. Volkswagen will showcase it at the Auto Expo 2020.

Although the Tata Gravitas is said to be an all-new model, it is actually the 7-seater version of the Harrier. It is expected to come with some visual updates to the front, rear and in the cabin as well to differentiate itself with the Harrier.

The Gravitas will borrow the 2.0-litre diesel engine from the Harrier. It will rival the XUV500 and the other compact SUVs. The Gravitas is expected to launch around the Auto Expo 2020.

Recently, the S-Cross facelift with a 1.6 badge was spotted, which indicates that the 1.6-litre diesel engine could be re-introduced with the S-Cross. This engine offers a hammering 320Nm torque and enthusiasts loved it.

The C5 Aircross would be going up against the likes of the Hyundai Tucson and Jeep Compass. It is expected to be priced around Rs. 20.0 lakh. The SUV is likely to launch by the end of 2020.

The Karoq would be competing in the mid-size SUV segment with cars like the Honda CR-V and Hyundai Tucson among others. The Karoq is likely to come with a price range of around Rs. 20.0 lakh to Rs. 30.0 lakh.

After tasting great success with the Hector, MG is preparing to launch the Maxus D90. This huge SUV is likely to get some first in segment features along with competitive pricing to draw the buyers’ attention.

The Maxus D90 is a proper full-size SUV with a massive 5005mm length. It might get a 2.0-litre turbo diesel engine paired with a 6-speed manual transmission along with 4-wheel drivetrain as an option.

The Maxus D90 will compete with the likes of the Toyota Fortuner and Ford Endeavour in the premium full-size SUV segment.

The highly-successful MG Hector is also about to get a 6-seater configuration. To make things interesting, the 6-seater Hector could be introduced with a mild design update. It might also get a new name to mark itself apart from the existing 5-seater version.

The upcoming Hector 6-seater will offer captain seats in the second row to offer a more luxurious cabin experience to buyers who mostly spend time in the back seat. With an aggressive price tag, it’ll compete not only with mid-sized SUVs, but also with 6-seater MPVs like the Mahindra Marazzo and Maruti Suzuki XL6.

The Volkswagen T-Cross is expected to launch sometime within this year. The T-Cross may get a 1.0-litre turbo petrol engine and a 1.5-litre turbo diesel engine options. Both the engines could get a 7-speed dual-clutch automatic transmission.

The international VW T-Cross measures just over the 4-metre mark, and is expected to be slashed down to fit the subcompact SUV segment in India. The T-Cross would thus rival the likes of the Maruti Suzuki Brezza, Hyundai Venue, Ford EcoSport and Mahindra XUV300. The T-Cross is likely to be priced on the higher side, as it could be positioned as a premium option in the subcompact SUV class.

The MG Baojun 510 could also be preparing to hit the Indian car market, and would get a new name here. This new SUV might be packed with a 1.0-litre turbocharged engine and a 1.5-litre normal petrol engine choice. It may not get a diesel engine at all.

The MG Baojun 510 will compete with compact SUVs like the Hyundai Creta and Kia Seltos.

It is being speculated that Mahindra is preparing the next generation model of the Scorpio, and it is believed to be testing under heavy camouflage. As per the spy images the next-gen Scorpio would get new styling along with a lower roof-line and a bigger glass area to offer a sportier appeal.

The Mahindra Scorpio is a very old warhorse which enjoys constant love from the real SUV fans. However, the advent of the city-friendly SUVs, the Scorpio is facing stiff competition. Thus, the new-gen model should help to retain the positioning of the Sporpio.

In 2020, the Mahindra Thar SUV will come in its new generation model. Besides a BS6-compliant engine, it is expected to get a tweaked exterior, redesigned cabin and some creature comforts.