Renault Triber has received a good 4-star rating at the latest round of crash tests conducted by the Global NCAP. It is not surprising as the Magnite, its platform sibling, received a similar rating at the ASEAN NCAP earlier this year. Both the cars are based on the CMF-A+ platform. Talking about child safety, the Triber scored 27 points out of 49 resulting in a 3 star in child safety. Since the Triber is not equipped with ISOFIX child seat anchors, the child seat for the 3-year-old was installed FWF (Forward Facing) with the adult seatbelt and was not able to prevent excessive forward movement during the impact. Chest protection was average while head protection was low. 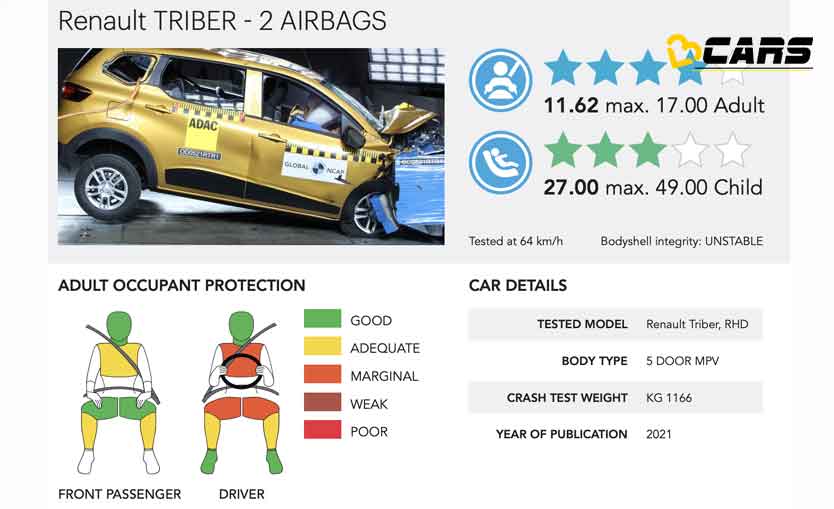 The 18-month-old Child Restraint System (CRS) was installed with

the adult seatbelt rearward-facing offered full protection to the child occupant. However, the CRS marking was permanent.

GNCAP tests the base-spec model of a car. The base-spec Triber is equipped with safety features like dual front airbags, ABS with EBD, rear parking sensors, seat belt reminder and speed alert system. In the higher variants, it also gets safety features like speed sensing door locks and side airbags. If Renault had offered ISOFIX child seat anchors on the Triber, there is a possibility the MPV would have received a better rating in child safety. That said, with an overall rating of 4-star the Triber is the safest MPV in under Rs 10 lakh.

Renault offers the Triber with a single 1.0-litre naturally aspirated engine only. It makes 72PS and 96Nm paired to a 5-speed MT and AMT.

Prices of the Triber range from Rs 5.50 lakh to Rs 7.95 lakh (ex-showroom Delhi). While the Datsun GO+ is its sole rival, it can be seen as a competition to hatchbacks like the Maruti Swift, Grand i10 Nios, Ford Figo and Ford Freestyle.