Its a known fact that Jeep is working on the Compass facelift for a while and the facelifted SUV has been spotted testing a bunch of times. While the car seen in the earlier spy shots was heavily camouflaged revealing very little about the updated SUV, the latest image reveals the facelifted SUV in its entirety. The Jeep Compass facelift looks largely similar to the existing model but features some mild updates. Upfront, it gets updated headlamps with which are now more closely packed with the slightly tweaked 7-slat grille. The front bumper is also new and features a black element running across width above the central air dam connecting the fog lamp housing.

The spy shot also showcase the updated Compass Trailhawk. While it looks similar to the standard Compass, it gets a blacked-out element on the bonnet, all-black grille and a redesigned bumper with a visible red hook.

On the side, both the versions of Compass get new set of alloy wheels. Coming to the back, the changes are quite mild in nature. The only visible change is in terms of updated tail lamps with new detailing and blacked-out elements.

Similarly, on the inside, the layout remains unchanged except for a larger 10.1-inch touchscreen infotainment system. Other features that are expected to make way to the facelifted Compass include wireless Apple CarPlay and Android Auto, integrated Alexa support and over the air software updates, a 360-degree camera, LED lighting, wireless charging and a digital instrument cluster.

Under the bonnet, while the global-spec Compass facelift is likely to get a new 1.3-litre turbocharged petrol engine along with a hybrid variant, the India-spec Compass is expected to carry forward with the same set of BS6 engines as the current model.

In India, the Compass is offered with both petrol and diesel engine options. The petrol engine on offer is a 1.4-litre turbocharged unit making 163PS and 250Nm mated to a 7-speed DCT. The diesel engine, on the other hand, is a 2.0-litre unit making 173PS and 350Nm paired to either a 6-speed MT or a 9-speed AT.

Jeep will unveil Compass facelift later this month. So, expect the facelifted Compass to land in India in 2021. It will be manufactured at FCA’s Ranjangaon facility. Jeep is also working on a 7-seater version of the Compass and it is also expected to debut by 2021. Once launched, the Compass will compete with likes of the Tata Harrier, Hyundai Tucson, MG Hector and the Mahindra XUV500. 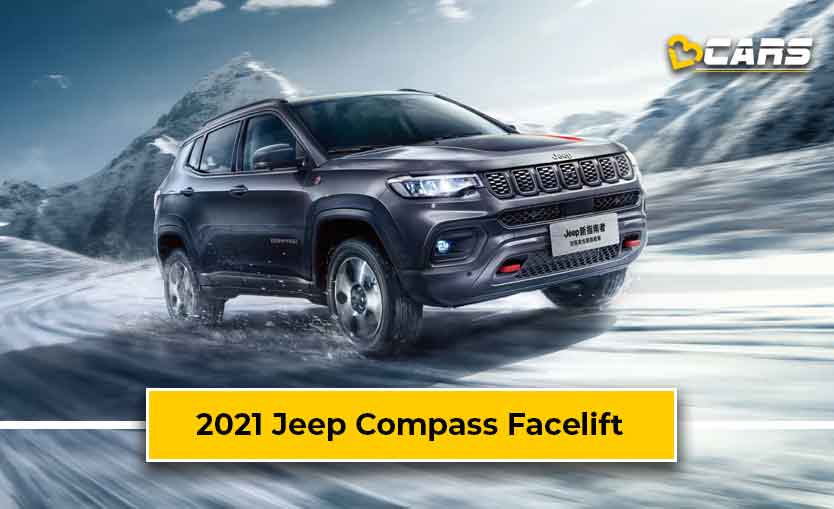