Apart from showcasing the 8- Series Convertible at the LA Motor Show, the German luxury automaker BMW also flaunted the all- new X7 at the ongoing motor show. The biggest and the most luxurious offering by BMW will be launched next year in the US. The model is based on the X7 iPerformance concept that was displayed at 2017 Frankfurt motor show.

Measuring 5,151mm in length, 1,990 mm in width and 1,805 mm in height, the all- new BMW X7 will be offered in two trims — X7 xDrive40i and X7 xDrive50i. The luxurious SUV will offer a seating for six passengers with the optional middle row captains’ seats or seven passengers. The reason is that the middle- row seats can slide fore and aft by 145 mm. When in the forward position, the third row will accommodate two adults with enough room to keep them comfortable with ample head & leg room on a longer drive. Also, all three rows of the X7 are electronically adjustable. At the exterior, the upcoming BMW X7 gets large kidney grille in an upright front end, angular LED headlights with optional laser projectors, a heavily contoured bonnet, a tall glasshouse and a two- piece electric tailgate. The SUV rides on 20- inch alloy wheels as standard which can be upgraded to 21- to 22- inch lightweight alloy wheels as well. At the inside, the new X7 follows the same design pattern as the existing X5. The SUV gets a multi-layered dashboard that houses a digital instrument panel and a standard 12.3- inch touchscreen infotainment display. A four- zone climate control system, soft- close doors, a three- piece glass sunroof and a park assistant function with a reversing camera, all come as standard equipments across the trims. Other than these, the trunk space is 326 litres with the third row up and 740 litres with it folded, which can be increased to 2,120 litres by folding the second row seats.

Mechanically, the X7 xDrive40i features a 3.0- litre inline- six that generates 335 hp and 447 Nm of torque, while the top- spec X7 xDrive50i gets a 4.4 L V8 with 456 hp and 649 Nm of peak torque. Both the engines feature BMW’s xDrive all- wheel- drive system and an eight- speed automatic transmission and both the variants ride on an air suspension with adaptive dampers. According to BMW, the time taken by the xDrive40i to reach from 0- 100 kmph is 6.1 seconds, while that by the xDrive50i is just 5.4 seconds for the same. While the rear- wheel steering has been made available by the automaker, the optional Active Comfort Drive system uses cameras to look at the road ahead and proactively adjust the suspension for corner- carving firmess or straight- line comfort. 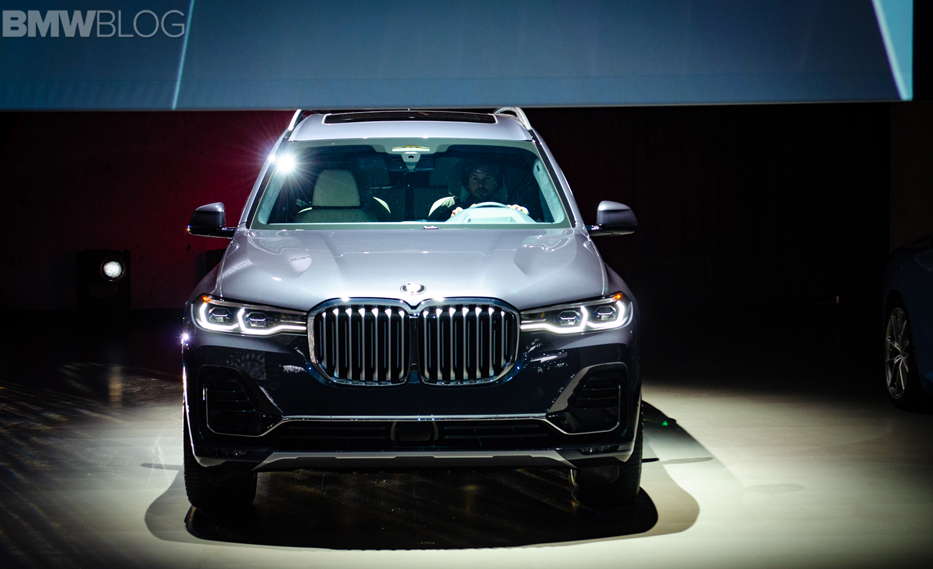 Though BMW has not yet confirmed about the X7 making its way to the Indian market, but the automaker has plans to launch 12 cars in 2019 in the country. The German automaker has already confirmed about the X4 coming to India to rival the Mercedes- Benz GLC, however, there is no word about the X7 India launch but we can expect it to be on the cards. Apart from these, BMW will also update its existing portfolio, where the X1 is expected to get a facelift, the X5 and X6 will undergo a generation change. The automaker has already unveiled the fourth- gen X5, while the facelifted X1 and third- gen X6 are yet to be revealed. When launched, the BMW X7 will rival the likes of the Mercedes-Benz GLS in the segment. Stay tuned to V3cars.com for further updates on the BMW X7 in India.