Pro Tip: BMW launched the all-new X7 in India in xDrive40i petrol variant and the xDrive30d Signature diesel variants, both priced at Rs. 98.90 lakhs (ex-showroom India). X7 comes with three rows of seating arrangement that is offered in either 6 or 7-seater configurations.

BMW has launched the all-new X7 in India starting at Rs. 98.90 lakhs. The new flagship SUV is positioned above the BMW X5 and is available in both petrol and diesel options. The new 2019 BMW X7 is available for sale in India in xDrive40i petrol variant and the xDrive30d Signature diesel variants to choose from. Interestingly, both variants of the luxury SUV have been tagged at Rs. 98.90 lakhs (ex-showroom across India). The xDrive40i gets powered by a 3.0 litre straight-six, turbocharged petrol mill that is capable of churning or a max power output of 344 PS and 450 Nm of top torque. On the other hand, the xDrive30d gets a 3.0 litre straight-six turbocharged diesel motor that is good to generate 344 PS of power and 620 Nm of torque. Both the engine options have been mated to a sophisticated 8 speed automatic transmission gearbox along with BMW’s xDrive all four-wheel drive system with different drive modes to offer powerful performance on various kinds of terrains. When it comes to visual appeal, the new BMW X7 luxury SUV flaunts a very upright front fascia that’s complemented with sharp and sleek LED headlights. The front façade gets the patent large BMW kidney grille design. At the back, the vehicle gets stylish wide LED tail lights which are connected by a chrome strip for added bling that adds to the overall glam and sophisticated styling of the sporty SUV. On the whole, the large SUV masks its massiveness well with its stunning and styling that makes it look well proportionate and highly visually appealing.

Step inside the new BMW X7, and it looks reminiscent of the new BMW X5. Nevertheless, the X7 is different with its individual styling touches and its three rows of seating arrangement that is offered in either 6 or 7-seater configurations. The X7 offers an extensive range of premium features that include a massive 12.3 inch touchscreen infotainment system along with Apple CarPlay, gesture control and tons of other features; a digital instrument cluster, 5-zone automatic climate control, park assist (with autonomous parking function), reclining function for all-three rows of seats, BMWs Laserlight headlamps and ambient lighting which is also present on the large three-piece glass sunroof among much more. 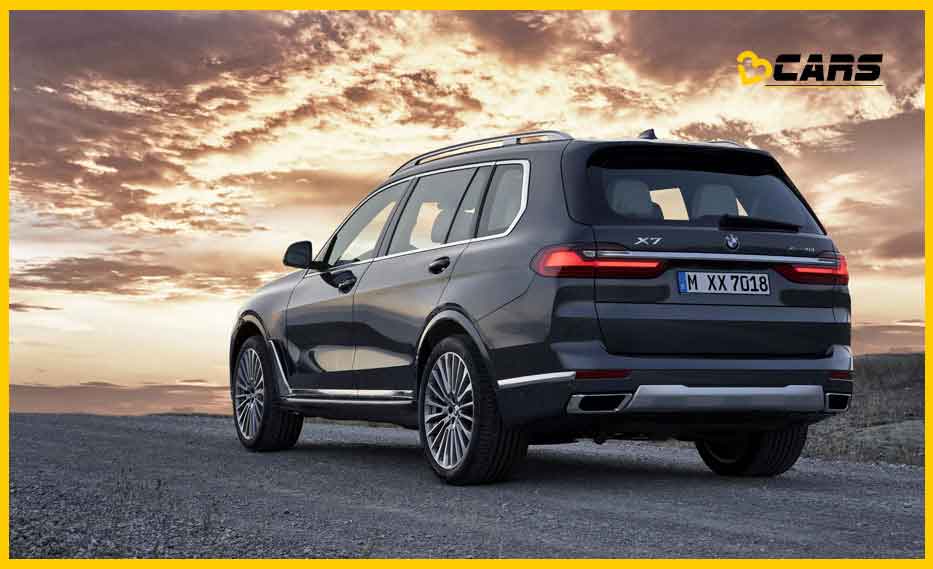 However, the petrol X7 40i variant lacks few of these luxurious features. For instance, instead of 5-zone it gets 4-zone climate control unit, it gets adaptive LED headlamps and a rear entertainment package. The diesel and petrol variants are further distinguished, as the diesel avatar comes with a 6-seater seating arrangement as standard, while the petrol version is a 7-seater as standard but also offers a 6-seat configuration option.

In India, the X7 30d variants get locally assembled while the 40i variants gets imported as CBU. BMW will also be bringing in the range-topping X7 M50d powered by a 405 PS/760 Nm, 3.0-litre in-line six-cylinder, quad turbocharged diesel motor in October this year.

The BMW X7 SUV locks its horns with the likes of the Mercedes-Benz GLS and the Range Rover in India.