Honda recently increased the prices of all of their cars. The WRV and Amaze diesel variants got hit especially hard. After the August 2021 price increase, is it still worth buying the Honda WRV diesel? Let’s find out. 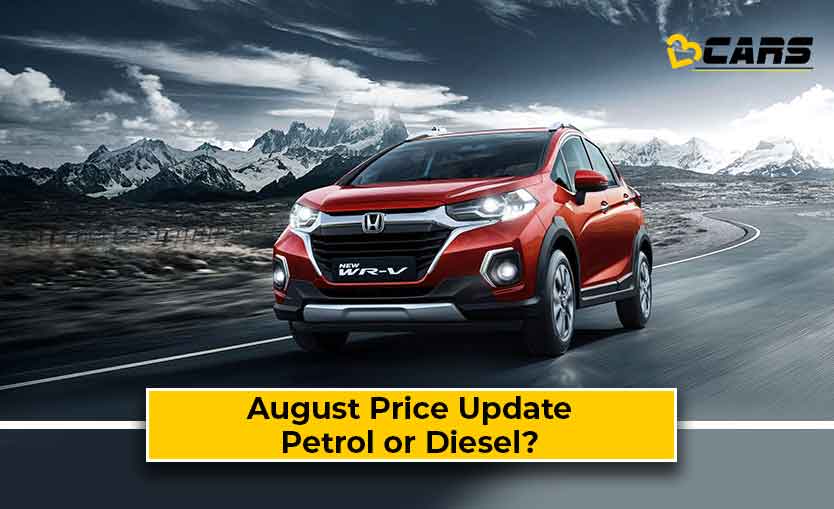 First, let’s look at the old prices to see what extra premium you were paying earlier for the WRV diesel over the WRV petrol:

Now, let’s see how much premium you will have to pay for the WRV diesel over the WRV petrol after the price increase:

Kilometres to Recover or Breakeven With Honda WRV Diesel

The Honda WRV petrol promises a mileage of 16.5kmpl with the manual transmission. With an estimated Rs. 102/litre price of petrol in Delhi, it’ll cost Rs. 6.18 to cover 1km with the WRV petrol manual.

With the diesel manual, the WRV claims to deliver 23.7kmpl. At an estimated cost of Rs. 90/litre for the diesel fuel, the WRV diesel will have a fuel cost of 3.8/km with the manual transmission.

Note that prevailing Delhi fuel cost of Rs. 102 for petrol and Rs. 90 for diesel. These calculations are done using the official ARAI mileage figures as the baseline.

Should You Buy The Honda WRV Diesel After Price Increase?

While the petrol prices are going up, diesel is also getting expensive. Such a high premium certainly makes it difficult to look at the WRV with an unbiased view.

However, the percentage-wise, the significantly poorer fuel efficiency of the WRV petrol makes the WRV diesel look a lot better in comparison. Therefore, even with the new prices, it’ll only take you about 85,000km to break even. This is still quite high but nowhere near as high as Amaze diesel’s breakeven, which goes up to 1.63 lakh km.

Moreover, not only is the WRV’s 1.2-litre petrol engine is too small to offer good drivability, but it also has a lower torque rating and that too comes at a high RPM. This engine characteristic also makes it a poorer choice for relaxed everyday driving. This is because all of its power is concentrated at the higher RPMs. So, you’ll need to shift down and rev it high to get good acceleration out of it. Driving like this will also significantly impact your car’s real-world efficiency.

In comparison, the diesel engine’s significantly better torque output, especially at lower RPMs will also make city driving much more relaxed for you as well as for the engine. The smaller, 1.2-litre petrol engine may be adequate for the lighter Amaze, but it’s certainly not the ideal choice for the larger WRV.

We’d still recommend the WRV to you if:

If you don’t meet these criteria, then you could manage with the WR-V petrol and save the cash.