Mahindra has been working on the next-gen Scorpio for a while now and the SUV has been spied on multiple occasions. The latest round of spy shots reveals the SUV’s cabin which has received a major design overhaul. The central console consists of a new touchscreen infotainment system (looks like a 10-inch unit) sitting at the top flanked by vertically stacked central air vents with physical controls for the touchscreen placed just under it. Below the infotainment setup, comes the controls for the AC which confirms that the new Scorpio will be equipped with a dual-zone AC. Below the AC control unit, there are an array of buttons that are borrowed from the Thar and house controls for various functions like hazard light, seat belt reminder, and more. The lower portion of the central console houses a storage space with two USB ports (one for fast charging) and a 12V power socket.

The spy shots also reveal the instrument cluster which is quite conventional with an RPM meter on the left and a speedometer on the right flanking the central MID. It also gets a new flat-bottom steering wheel with controls for the media, voice control and cruise control. The spy shots also show a manual day/night IRVM but we expect Mahindra to offer auto-dimming IRVM, at least on the top-spec Scorpio. Mahindra will offer the Scorpio with both manual and automatic transmission options but the test mule spied was equipped with an automatic transmission, as seen in the spy shot. Behind the gear knob, it gets a rotary knob which might house controls for multiple driving modes and a 4WD system. Earlier spy shots have already confirmed that the new Scorpio will be equipped with a shift-on-fly 4WD system. 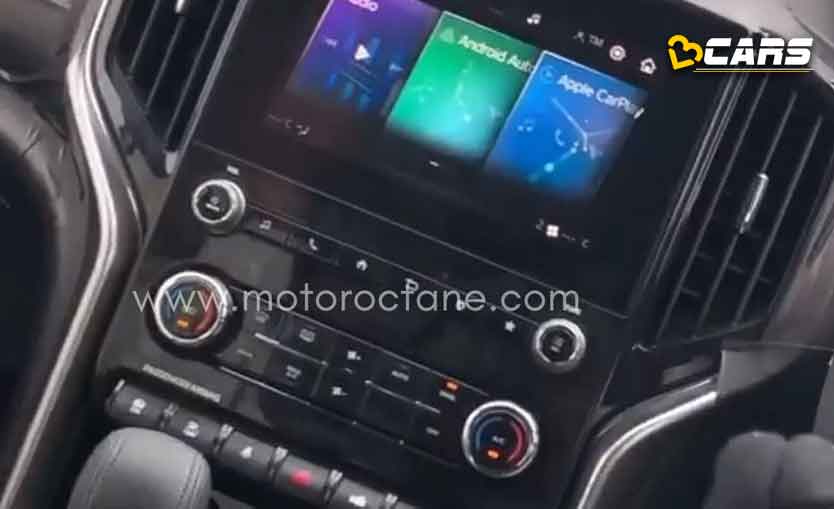 Under the hood, the new Scorpio is likely to borrow Thar’s 2.0-litre turbo petrol engine and 2.2-litre diesel engine but in a higher state of tune. In the Thar, while the petrol engine makes 150PS and 320Nm, the diesel engine produces 130PS and 300Nm. Both the engines are mated to a 6-speed MT as well as a 6-speed torque converter automatic.

Mahindra is expected to debut the new Scorpio in early 2022. Prices are expected to start at a premium over the current model which retails from Rs 11.99 lakh to Rs 16.49 lakh (ex-showroom Pune). Since the Scorpio is based on a ladder-frame chassis, it has no direct rivals. Pricewise, it competes with the Hyundai Creta, Kia Seltos, Renault Duster, MG Hector and upcoming SUVs like the Skoda Kushaq and Volkswagen Taigun.