We have curated a list of 7 petrol-powered cars with the best GNCAP safety score.

Note that, the adult safety is out of 17 while the child safety score is out of 49. GNCAP condenses the score into a star rating for easy understanding. To maintain consistency, this list only includes made-in-India cars tested by Global NCAP. Save for a lowly ground clearance of just 180mm and slightly expensive price tags, there’s little to fault with the XUV300. It is the only car in its segment to offer driver’s knee airbags. The XUV300 is also the only car in its segment to offer rear disc brakes. At one point, this was the only car under Rs. 10 lakh with 3-point seatbelts for all occupants - including the middle passenger in the rear seat. Unfortunately, this feature is no longer available in this car.

Note that these scores are for the 2-airbag version of the car. If you buy the higher variants with additional airbags, they’ll offer even better real-world safety. Next on the list is the Tata Altroz. This car offers tremendous value, especially with the base XE and higher XT, and XZ variants. Check out our Altroz variants explained article or video to find out which variant of this car you should buy.

There are 2 petrol engines to choose from - a 1.2-litre normal and a 1.2-litre turbo. Unfortunately, neither of these are available with an automatic transmission. But if you can manage the manual transmission, then its safety score should help you make peace with modulating the clutch pedal. The Altroz narrowly beats the Nexon in the crash tests but the two cars are neck and neck. Given the heavier kerb weight of the Nexon, there’s no 1.2-litre normal petrol engine options with this car. Moreover, most of Nexon’s variants are available with an AMT automatic transmission. The straight lines of the Polo’s body panels do well to keep it from ageing. The car’s design is 10 years old and still, you can appreciate the elegance in its simplicity. Thankfully, the performance is not that old as Volkswagen offers this car with a turbo petrol engine from Comfortline variant onwards.

The Polo with 2 airbags scored 12.54 for adult safety and 29.91 for child safety. Its combined safety rating for adult and child occupants stands at 4 stars and 3 stars, respectively. GNCAP tested this car way back in 2014, but the Polo continues to use the same frame and body shell and keeps its safety score intact. The new Mahindra Thar scored 12.52 and 4 stars for adult safety and got 4 stars in child safety with a score of 41.1. On the affordable spectrum of this list, you have the Tata Tiago and Tigor with a combined price range of Rs. 5.0 - 8.0 lakh (ex-showroom). The Tata twins are worth considering their safety alone even if you have to compromise a bit on the style, features, performance, reliability and perceived build quality front. Thankfully, you don’t have to make that compromise, which makes the Tiago and Tigor easy recommendations for anyone considering a small car in this price band. Both of these are also available with the options of AMT automatic making them convenient for city as well as highway use.

These cars use the same frame and carry a score of 12.52 for adult safety and 34.15 for child safety. The final safety rating of the Tiago and Tigor is 4-star for adults and 3-star for children.

Here are the prices of the Tata Tigor petrol variants: 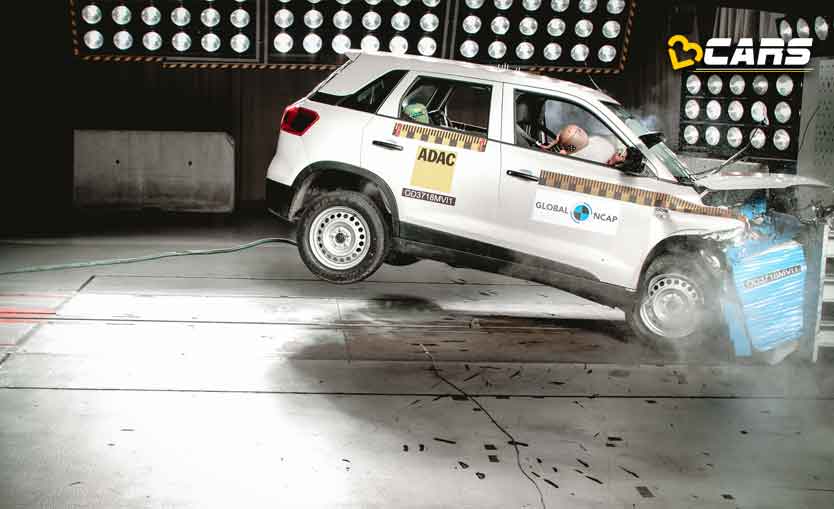 Finally, we have the Maruti Suzuki Arena Vitara Brezza and its rebadged cousin, the Toyota Urban Cruiser. The Brezza was once at the top of the charts with just a diesel engine. After the facelift, the car is trying to get to the top with a petrol-only powertrain option and it’s getting some help from the Toyota Urban Crusier.

In the GNCAP tests, the Vitara Brezza scored a respectable 12.51 points out of 17 for adult safety and a barely acceptable 17.91 points out of 49 for child safety. The overall safety rating for these cars stands at 4 stars for adults and 2 stars for children.

Here are the prices of the Toyota Urban Cruiser petrol variants: