Tata Motors’ new premium hatchback, Altroz, is touted to be a whole new benchmark in its own class. Apart from attractive exterior styling and a long list of features, the Tata Altroz is also the only car in its segment to achieve 5-star safety rating from GNCAP. Let’s examine the top variants of the Altroz with petrol engine to see if it’s worth buying. Here, we are going to look at the top end variants of the Altroz petrol, namely - the XZ and XZ(O) along with the Urban package option to find the answer. Read on to know more about these top variants of the new Tata premium hatchback to help with your buying decision.

What Are The Prices Of The Tata Altroz XZ/ XZ(O) and XZ Urban Petrol Variants?

Here is the full price list of all the variants of the 2020 Altroz: What Is The Dimension Comparison Of The Tata Altroz Petrol?

Here are the Altroz’s dimensions details and its comparison with its competitors:

The Tata Altroz’s is a spacious premium hatchback and its dimensions are on par with its market competitors. At 1755mm, the Altroz is the widest in its segment. The Altroz is the second longest in its class, after the Maruti Suzuki Baleno and its twin the Toyota Glanza. The Altroz is also the second tallest after the Honda Jazz. Thus, it should offer good interior space. However, the Altroz’ wheelbase measures the shortest among its prominent rivals in India. This means that the rear leg space in the Altroz is not that great, but the hatch offers a good cargo capacity of 345 litres.

What Is The Engine Specs Comparison Of The Tata Altroz Petrol?

The following are the specs details and comparison of the Tata Altroz petrol with its rivals:

The Tata Altroz premium hatchback’s petrol version packs in a 1.2-litre engine that delivers 86PS of power and 113Nm of torque. The Altroz petrol has the highest power output second only to the Honda Jazz in the segment, while the torque output is more than the Jazz and on par with the other rivals. However, the Altroz’s peak torque output is achievable earlier at 3300rpm as compared against its peers. The Altroz’s 1.2-litre petrol engine gets equipped with a 5-speed manual transmission, while there’s no automatic option yet.

What Are The Features Of The Tata Altroz XZ Petrol?

The following are the features that Altroz XZ variant offers over the XT variant: What Are The Features Of The Tata Altroz XZ (O) Petrol?

The XZ(O) variant is Rs. 25,000 more expensive than the XZ variant, and offers you just a black roof and nothing more.

What Are The Features Of The Tata Altroz XZ Urban Package?

The XZ Urban package adds Rs. 30,000 to the price tag of the XZ petrol variant and only Rs. 5,000 over the XZ(O)’s price. This accessory package offers not only a black roof, but also offers the added features including body-coloured outside mirrors and body-coloured interior accents.

The top-trim XZ is the variant that we recommend the most in the Tata Altroz lineup. Its long list of added features makes the XZ variant well worth a buy and an upgrade over the XT variant and even the XM. The XZ offers the most value for money quotient in the Altroz range. When it comes to the Altroz XZ (O), if you wish to spend Rs. 25,000 extra just to get a black roof, then you can certainly do so. However, we would highly recommend to spend a tiny bit more (Rs. 5000) and go for the XZ Urban pack instead to get a couple more cosmetic features. Nevertheless, the Altroz XZ remains our top recommendation. 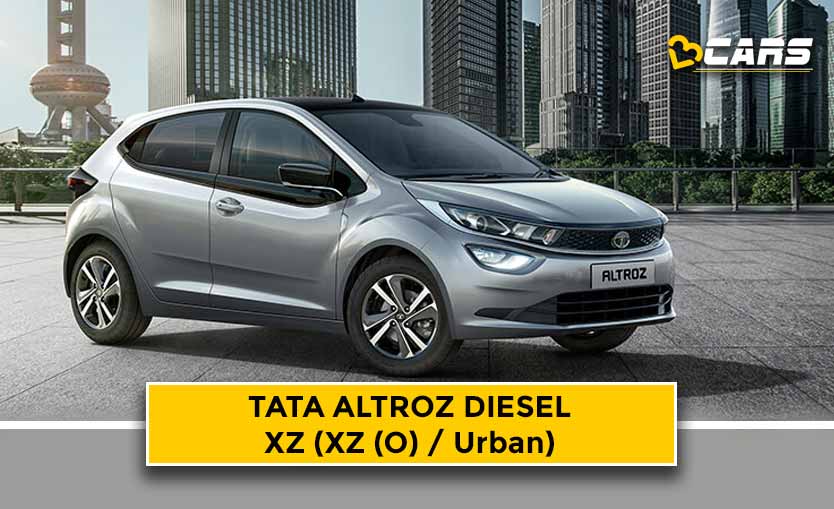