It is a known fact that MG is gearing up to launch a new SUV in India and it will go on sale by the end of this year. While MG has confirmed which SUV will go on sale later this year but we expect it to be the ZS petrol as it has been spotted testing in India on multiple occasions. 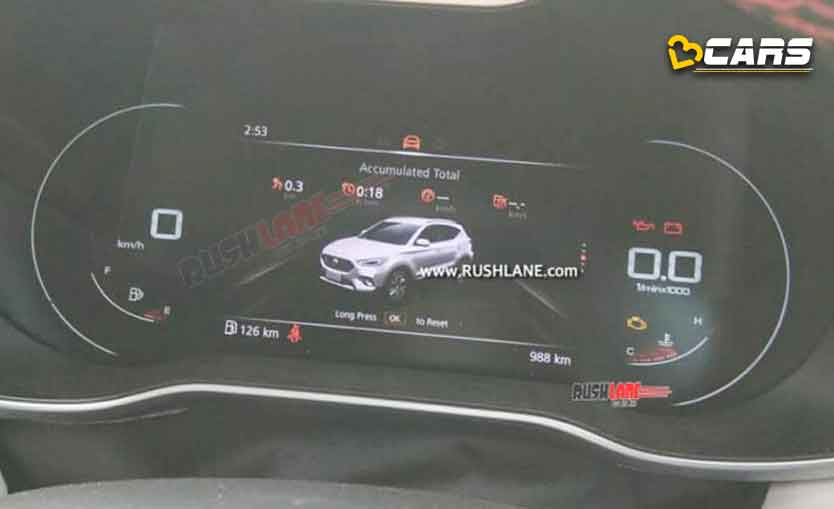 The interior of the SUV has been spied for the first time. While the cabin layout of the SUV looked quite similar to the ZS electric (pre-facelift model), it featured a digital instrument cluster. The instrument cluster comprised of a larger rectangular screen flanked by two circular screens. Other elements visible in the spy shots include the push-button start, three-spoke steering wheel and a touchscreen infotainment system that looks similar to the 8-inch unit seen on the ZS EV.

MG showcased the ZS facelift at the 2020 Auto Expo. In terms of design, the ZS facelift looks a lot sharper than the pre-facelift model which is already on sale in India in its EV avatar.

Upfront, the SUV gets a blacked-out MG front grille with a honeycomb pattern instead of the chrome studded grille found on the ZS EV. It is flanked by redesigned LED headlamps that looks sharper than before. The front bumper is also refreshed and features a large central air dam flanked by fog lamps. On the side, it looks identical to its electric counterpart save for a new set of alloys. At the back, while the profile remains unchanged it gets updated tail lamps and a redesigned bumper.

While globally the SUV is called the ZS Petrol, in India, it is likely to be named the Astor as MG has already trademarked the said name. MG had earlier confirmed that the new SUV will go on sale in Q3 2021, however, the launch might get delayed due to the worsening Covid-19 conditions in the country. Prices are expected to range from Rs 10 lakh to Rs 16 lakh. It will take on likes of the Hyundai Creta, Kia Setos, Nissan Kicks, Renault Duster and the upcoming SUVs like the Skoda Kushaq and the Volkswagen Taigun.