Skoda has finally ended all the mystery and tons of speculations revolving around the upcoming Vision X based SUV model’s official name. The Czech car maker has announced that the production version of the Vision X concept model will be known as the Kamiq in the car markets of Europe. Skoda has also confirmed that the new SUV will have its world premiere at the upcoming 2019 Geneva Motor Show that will be held in March.

Earlier there have been many reports saying that the Skoda Vision X based new SUV will be getting a brand new name that’ll start with ‘K’ and end with ‘Q’ following the new naming strategy of Skoda’s new SUV lineup. The name ‘Kosmiq’ was speculated a lot, but it seems that the Vision X based SUV’s name already existed in the Skoda family. Apart from the global Kodiaq and Karoq, Skoda already offers a SUV called the ‘Kamiq’, but it is a China specific model. The China exclusive Skoda Kamiq SUV was introduced last year. The Vision X based SUV is now named as the Kamiq as well, but it is a different model based on a different platform. The China-spec Kamiq is based on the older PQ-series platform, while the new upcoming Skoda Kamiq for the European market will be based on the newer VW MQB A0 architecture, which is shared with the new Volkswagen T-Cross SUV. The new Kamiq will also share the powertrain and some styling bits with its German sibling. 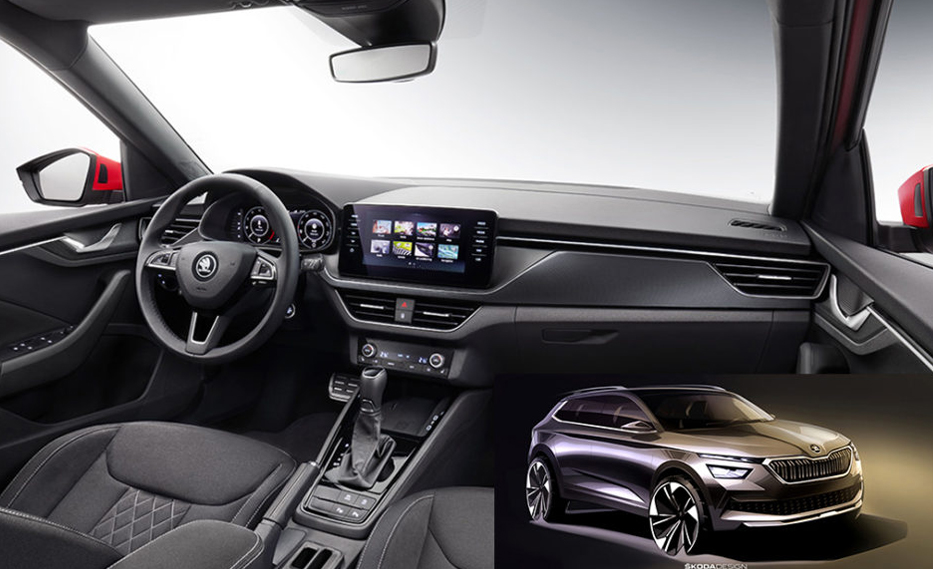 The new Skoda Kamiq SUV after launching in Europe is expected to be a global model and is also expected to come to India, although it would be based on a different platform. The new Kamiq is likely to hit the European market towards the end of this year itself and will closely follow the design lines that the Vision X SUV concept showcased at 2018 Geneva Motor Show.

The Skoda Kamiq would get powered by conventional petrol engine choices and also CNG options. The CNG option will feature a 1.5 litre, 4-cylinder turbocharged mill generating 131 hp of power along with 250 Nm of torque. This engine gets paired by two electric motors - a belt-driven starter generator to support powering the front axle, and a second 27 hp electric motor to support powering the rear axle. The CNG version will also come with a reserve petrol tank, in order to make sure that the car will start smoothly during very cold weather conditions. The concept SUV model claimed to offer a total range of around 645 kilometers. The all-new Kamiq SUV will be the third (fourth after the China-spec Kamiq) and the smallest in Skoda’s SUV range. It will sit below the Kodiaq and the Karoq and will flauntthe Czech car maker’s latest design philosophy. The light enclosures of the SUV have been raised, along with slim DRLs and integrated turn indicators above the headlights. The rear design of the SUV flaunts attractive L-shaped tail lights and similarly designed bumper reflectors as well. On the concept model, the tail gate didn’t house the Skoda logo, instead featured the brand name letterings.

The India-spec Skoda Kamiq SUV is expected to be introduced at the 2020 Auto Expo in the concept form. It is expected to look very similar to the Europe-spec Kamiq, and might even come with a new moniker.