Volkswagen has unveiled the production-spec Taigun ahead of launch. It looks almost identical to the Taigun concept which was showcased ahead of the 2020 Auto Expo. Upfront, the Taigun features a horizontally slatted front grille with a honeycomb finish. It is flanked by an angular dual projector LED headlamp with DRLs. The bumper is dominated by a huge central air dam with a thick chrome element running across the width enclosing the fog lamps on both ends.

The side profile looks clean with a sharp character line running across the length. Coming at the back, it gets connected tail lamps with a C-shaped element, just like the concept. The rear bumper features a chrome element running across the width replicating the front bumper design. The Taigun also gets black colour body cladding all around with faux skid plates at both ends further escalating its SUV quotient. The Taigun rides on the 17-inch alloys which look similar to the 19-inch wheels seen on the concept, in terms of design. 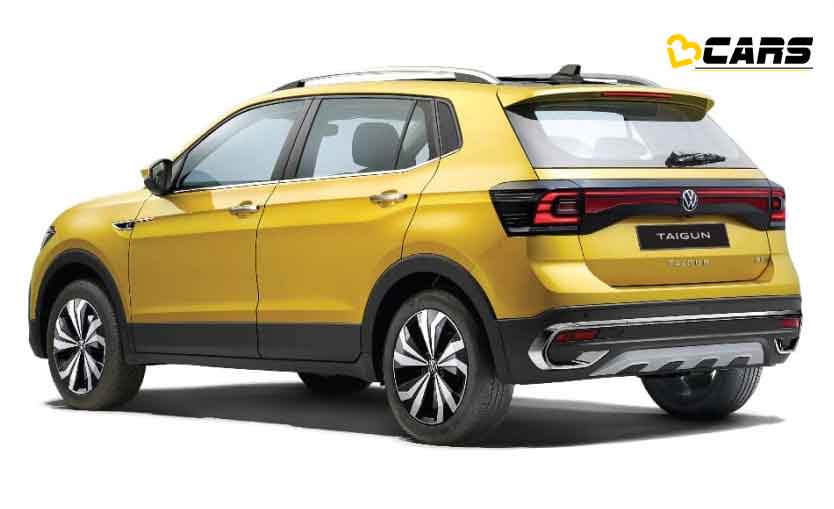 VW will also offer a GT variant of the Taigun as it does with the Polo hatchback. It will get exclusive elements like red brake callipers, red contrast stitching, GT badging and red ambient lighting.

On the inside, while the layout is expected to look similar to the concept, it will miss out on the coloured coded elements seen on the dashboard. That said, other elements are likely to be carried forward as such including a flat-bottom steering wheel, a 10-inch touchscreen infotainment system with Apple CarPlay and Android Auto (wireless expected), digital instrument cluster, ventilated front seats, auto AC, electric sunroof and a wireless mobile charger.

The Tiagun will not only share its MQB A0 IN platform with the Skoda Kushaq but will share its engines as well. Like the Skoda SUV, it will be offered with both 1.0-litre TSI turbo and 1.5-litre TSI Evo turbo petrol engine producing 115PS/175Nm and 150PS/250Nm, respectively. Both the engines will be offered with a 6-speed MT as standard with an option of a 6-speed torque converter automatic and a 7-speed dual-clutch automatic with the 1.0-litre and 1.5-litre engines, respectively. The bigger 1.5-lite turbo petrol engine is equipped with ACT (Active Cylinder Technology) that activates or deactivates two cylinders depending on the demand resulting in better fuel economy. VW has not yet revealed official fuel economy figures of the Taigun SUV.

In terms of dimension, the Taigun is expected to be similar to its platform sibling the Kushaq which measures 4225mm X 1760mm X1612mm (LxWxH). While the Taigun will be amongst the smallest SUV in its class along with the Kushaq, it will have the longest wheelbase at 2651mm.

Volkswagen is expected to launch the Taigun SUV around July-end or August soon after the launch of the Skoda Kusaq. Prices are expected to range from Rs 9 lakh to Rs 17 lakh. It will take on likes of the Hyundai Creta, Kia Seltos, Renault Duster, Nissan Kicks and the upcoming Skoda Kushaq.