It has been already reported several times that Renault is working on a Kwid based new compact MPV model specifically for the car market of India to crack the MPV segment of the country. Codenamed as the Renault RBC MPV, the model got spied a few times while testing on the road. Now, a set of new spy pictures of the new upcoming MPV model has offered a look at its interiors.

The upcoming Renault Kwid based MPV is a sub-4 meter vehicle that is similarly sized to its cousin – the Datsun Go+, which it will rival post its India launch. However, the Renault RBC seems to be a bit taller than that of the Go+, and it is expected to come with a better, feature-rich interiors. An idea has been already formed about the exterior design language of the RBC owing to the earlier spy images. And now, we also have a glimpse of the cabin of this new upcoming MPV, which offers an idea of what all to expect on the inside of this upcoming new member of the Renault family.

The latest spy shots of the Renault RBC test prototype model show the car’s dual-tone grey and beige interior color scheme, which also gets chrome accents on the instrument cluster as well as the gear knob. The MPV gets endowed with a three-spoke steering wheel that is similar to that of the upcoming Nissan Kicks. The MPV’s instrument cluster is also different and seems to be the revised version of the one seen on the Kwid. However, the car’s instrument cluster is expected to get a digital-analogue setup, unlike the Kwid’s all-digital unit.

The test prototype model was also seen fitted with electrically adjustable wig mirrors, a rear washer and wiper, more than 2 airbags and probably a larger touchscreen display integrated infotainment system that could be the 8 inch system from the upcoming Nissan Kicks. The spied prototype gets 15 inch steel wheels, but alloys are expected on the top variants. 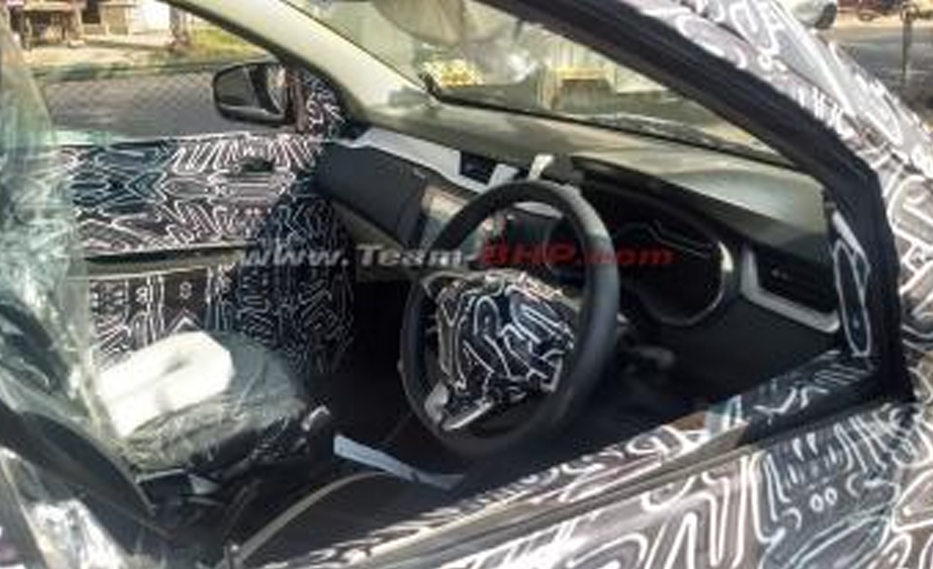 Despite being a subcompact vehicle, the Renault RBC will be a 7-seater MPV just like its Japanese cousin Datsun Go+. However, the spy shots haven’t confirmed the 7-seat configuration. The front seats that were caught by the spying shutterbugs show fabric upholstery.

The Renault Kwid based MPV is expected to an all-petrol model and might get powered by a 1.0L or 1.2L petrol mill. Going by the spy shots, it is certain that subcompact MPV will get both manual and automatic transmission choices. The automatic would feature the Kwid’s Easy-R AMT gearbox.

Although the Indian MPV market is not doing well excepting some star seller like the premium Toyota Innova and the much affordable Maruti Ertiga, Renault is bent on getting a sales volume drawing MPV model. While the premium looking Lodgy couldn’t make it big in India, we do hope that the RBC gets good success, given its priced right.

The Renault RBC MPV is expected to launch in India in first half of 2019. It is expected to be priced aggressively I the range of Rs. 5 lakhs to Rs 7.5 lakhs.