We compare City against other C-segment sedans on the basis of prices, engine specs and dimensions to analyse how it holds up against the competition. 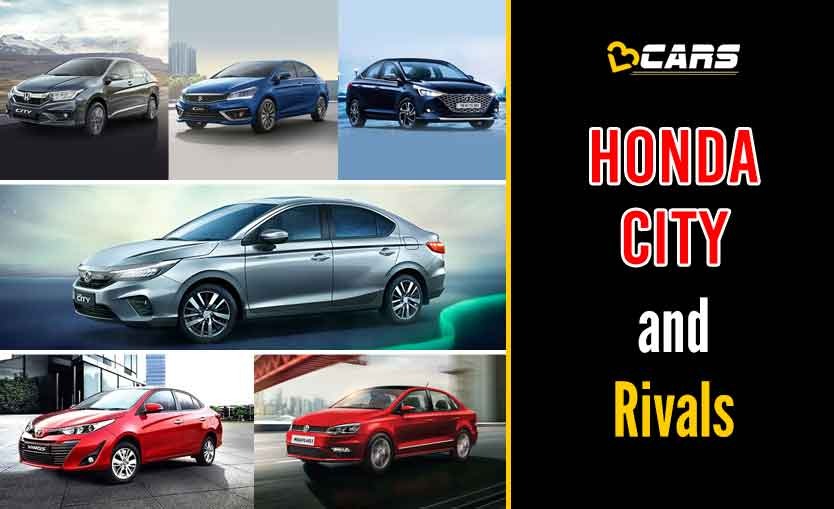 The new Honda City prices start from Rs. 10.90 lakh (ex-showroom) and it rivals the Maruti Suzuki Ciaz, Hyundai Verna, Toyota Yaris, Skoda Rapid and Volkswagen Vento in the segment. Since the older, 4th gen City will continue to be on sale, that car also becomes a rival for the new City. The complete price list of the petrol-powered City 2020 is as follows:

Honda City diesel comes with 3 variants but only with manual transmission: V, VX and ZX.

Honda City 5th gen is available with a 1.5L normal petrol engine paired to a 6-speed manual nd a CVT automatic transmission. The power and torque output of this engine are 121PS and 145Nm, respectively.

The new Honda City 5th gen is available with a 1.5L diesel engine with a 6-speed transmission. The power and torque output of this engine are 100PS and 200Nm, respectively.

Verna's diesel engine offers the best torque in this segment, so it is expected to offer better driveability compared to Honda City diesel. If you're looking for a car with low fuel costs, then Verna will be better since it’s the most fuel-efficient diesel car in this segment.

Honda City is 4549mm long, 1748mm wide, 1489mm tall and has a wheelbase of 2600mm. A wider body normally results in better shoulder room and a higher roof makes ingress & egress easier. A longer wheelbase usually results in more cabin space. It has a boot space of 506 litres. The city has a 165mm ground clearance and it rides on 185/55 R16 tyres size. The new City’s tank can hold 40 litres of fuel.

Amongst all the C-segment sedans, Toyota Yaris has the highest ground clearance and the shortest wheelbase. Together, this combination gives it the best breakover angle to go over tall speed breakers with ease. The new City is the biggest car in this segment and it’s likely to have the best cabin space.