German luxury automaker BMW has unveiled the updated version of the X1 internationally. After being on sale globally for the past three years, the existing third- gen BMW X1 was due for a facelift. The small “Sports Activity Vehicle” by BMW was spied testing last year and now the automaker has revealed the vehicle officially with minor tweaks here and there.

According to the company, the standard BMW X1 will be joined in the line- up by the BMW X1 M Sport, xLine and Sport Line models, each of which will feature distinctive looks and updates. In terms of noticeable changes, the new BMW X1 gets redesigned bumpers, the larger, new- shape BMW kidney grille and the new inserts for the rear apron are among the many updates to the exterior design. On the other hand, the BMW X1 M Sport will additionally offer front apron, side skirts, diffuser, wheel arch trim and cladding among the elements presented in body color. Also, the variants now get three new exterior colors and four new wheel designs ranging between 17 inches to 19 inches in size.

Not only the exterior looks appealing, but the interior of the BMW X1 is extremely spacious and comfortable and can be customized according to the individual needs. The sliding second row of seats and automatic tailgate operation has also been added this time as functionality- enhancing features available as options for the BMW X1. Other than these, the cabin gets the new, larger iDrive infotainment screen with the latest iteration of the software. A centrally mounted 6.5- inch screen is included as standard. If a navigation system is specified, either an 8.8- inch or the new 10.25- inch Touch Control Display – which can be operated using the BMW iDrive Controller, voice control or touchscreen technology also comes as part of the package. There is also a new electronic gear selector switch on offer at the inside. Also, to maintain the premium feel inside the car, the new contrast stitching on the instrument panel, which is black on its upper section and adopts the color of the interior upholstery lower down, has been offered. The contrast stitching is available for the xLine, Sport Line and M Sport models. In these variants of the X1, the floor mats also gain colored edging and contrast stitching for the edging. The BMW X1 can also be ordered with a choice of three new upholstery variants.

Talking about the major update, the upcoming BMW X1 gets a plug-in hybrid version called the X1 xDrive 25e pairing an electric engine to the BMW 1.5- liter petrol and producing 95 bhp electric engine driving the rear wheels, with a 125 bhp petrol powering the fronts. It’ll be good for 31 miles on electric power alone and a claimed 141 mpg too. Apart from this, all the existing engine options will remain the same. For the Indian market, we expect the petrol engine in the sDrive20i to remain the 2.0- liter four-cylinder engine that puts out 192 bhp and generates 280 Nm of peak torque, while the diesel cars are likely to continue with the 2.0- liter unit with 190 bhp and 400 Nm of maximum torque. Both the engines are mated to an 8- speed automatic transmission. However, minor improvements in outputs and efficiency can be there. 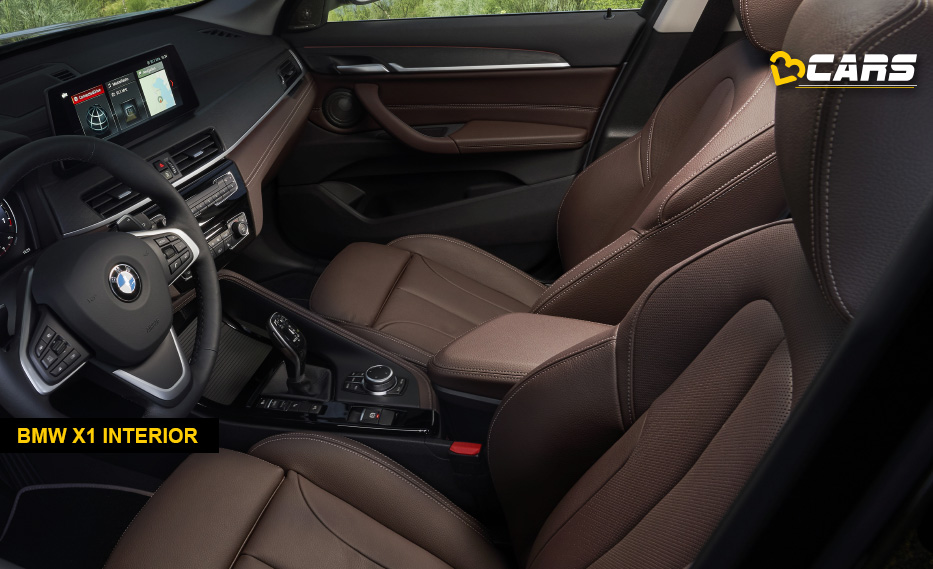 The next-gen BMW X1 is expected to go on sale in the next few months in the international markets, later followed by India launch expected in 2020. When launched, the BMW X1 will rival against the likes of the Mercedes Benz GLA, Audi Q3 and the Volvo XC40 in the segment. Stay tuned to V3cars.com for further updates on the upcoming next-gen BMW X1.