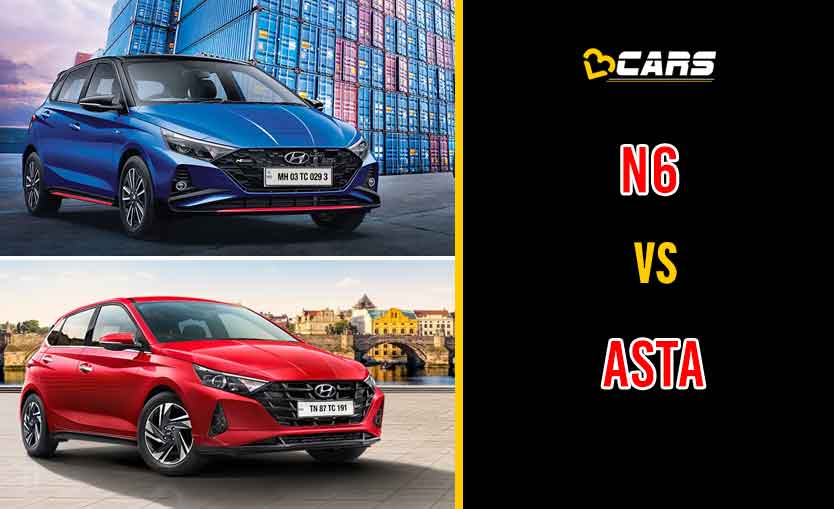 The N6 variant of the i20 N-Line is only available with the auto-clutch manual transmission (ACMT) for Rs. 9.84 lakh. The Asta variant of the regular i20 gets the option of DCT automatic and ACMT. For this comparison, we’ll only consider the ACMT version of the i20 Asta, which costs Rs. 9.92 lakh. So the i20 N6 is Rs. 7,700 cheaper than the i20 Asta.

The N6 is based on the i20 Sportz variant. Still, there are plenty of features that are common in the N-Line i20 N6 and the i20 Asta. Both cars get rear defogger, day/night IRVM, steering mounted controls, rearview camera, touchscreen infotainment, TPMS and remote central locking.

The N6 variant of the i20 N-Line gets a lot of style features to go with the N-badge, and the following unique features are worth highlighting:

The i20 Asta gets a bunch of important functional and safety features like:

However, it misses out on the electric sunroof and cruise control, which are getting more and more desirable by the day.

On the feature front, the two cars, i20 Asta and N-Line N6, are almost neck and neck. They both offer valuable features. The N6 beats the Asta by a small margin because of the highly-desirable and big-ticket items like the cruise control and sunroof. For everyday usability, the i20 Asta makes more sense. However, on the value and desirability side, the styling, cruise control, sunroof and the unique exhaust note of the i20 N6 make it a better choice. Hyundai i20 N-Line All The Extra Features Hyundai i20 To Get New Era Base Variant